Bhopal Gas Tragedy - what a shame for India

Decades after Bhopal was Gassed to Death, these children are yet to get justice. But we continue to buy eveready batteries (Union carbide made eveready batteries and the company subsequently changed its name to Eveready Industries.)
The corrupt Indian Judges compared the disaster to a 'traffic accident'. 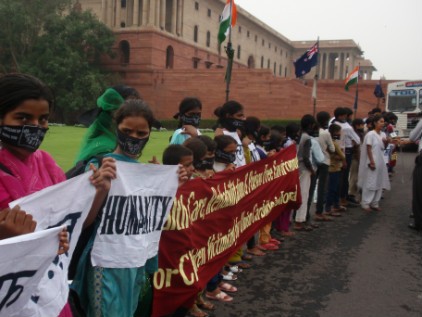 The judge(s) who delivered the Bhopal Gas judgment and mortgaged the basic rights of our dirty and black Indians to the Multi National Giant Union Carbide, became the chief turstee of the corpus fund and the Bhopalites are still struggling to get compensation and clean drinking water in the affected city.  Those judges want to be excluded from "Lok Pal" Act.

The culprit was rescued in a chartered plane and sent to his home land safely by the chief politicians and they want to be excluded from "Lok Pal" Act.

The battery of advocates, who shamelessly argued in favour of Union Carbide against dirty and black Indians before the Supreme court and are presently holding very senior positions in Congress and BJP, Popping up every evening on our TV sets preaching us about corruption free society, exhorting us about pros & cons of "Lok Pal" Act.

O God, Save my country from these judges, politicians, bureaucrats and legal vultures of Congress and BJP shade.

Hema,
You are right, even today the culprits lead a good life. It shows what level our country has sunk to. The multi-national giant is Dow chemical and I think only their Indian factory was called union carbide. now it's been sold to a bunch of Indians which includes khaitan family.

Nothing surprising, what else do we deserve when people like sheep have a government over which they have no control? The thought of a completely disarmed public is nothing short of horrifying. When people give up essential liberty to obtain temporary safety, this is the deal they are bound to get in return.

Don't we see that when only our "leaders" and "authorities" are allowed to carry guns and protect themselves, there is cause for concern. History tells a grim story of the events that follow disarmament, take Hitler, for example.

It is not surprising that these very globalist, nazi multinationals and bankers and some multi billionaires like George Soros are controlling governments and running propaganda compaigns in media to brainwash people into disarming them with purpose of excersising control over people in different countries.

Once people are disarmed and made helpless like sheep, the corrupt governments of these countries can do with utmost ease whatever these globalists want. It is no wonder why so many of the laws and policies dictated from outside our borders are being implemented blindly by corrupt bureacrats and politicians. This is one of our the major reasons why government is vehemently oppossing accountability under Jan Lokpal Bill as proposed by Anna Hazare.

"They who can give up essential liberty to obtain a little temporary safety, deserve neither liberty nor safety."-Benjamin Franklin

"God grants liberty only to those who love it, and are always ready to guard and defend it."- Daniel Webster

‘‘To preserve liberty, it is essential that the whole body of people always possess arms, and be taught alike, especially when young, how to use them...’’— Richard Henry Lee, 1787

“The two enemies of the people are criminals and government, so let us tie the second down with the chains of the Constitution so the second will not become the legalized version of the first.” – Thomas Jefferson

‘‘Guard with jealous attention the public liberty. Suspect everyone who approaches that jewel. Unfortunately, nothing will preserve it but downright force. Whenever you give up that force, you are inevitably ruined’’— Patrick Henry

"Political tags - such as royalist, communist, democrat, populist, fascist, liberal, conservative, and so forth - are never basic criteria. The human race divides politically into those who want people to be controlled and those who have no such desire." -- Robert Heinlein

Don't let our most Fundamental of Fundamental Rights that is the Right to Keep and Bear Arms be subverted under any pretext or excuse https://www.lawyersclubindia.com/forum/RKBA-guaranteed-under-Articles-19-and-21-of-Constitution-36011.asp

there you go again, DI...Guns no use against bhopal gas :D

Certainly guns no use against bhopal gas! But the absence of guns in hands of public particularly helps safeguard, secure and entrench the criminals in a very big way within the system of our banana republic and generally in society at large. Hope at least we understand this fact.
1 Like

DI...if we see the situation in Kashmir, it has become a militant state with everybody toting guns. when I was growing up in North India, I did wish I had a gun to threaten every creep who pawed at my body on buses and roads....but maybe there aren't enough guns nor bullets to shoot every pervert ;-)

In the 80s when there were Struggles of the All Assam Student Unions (ASSU) in Assam, and CRPFs were beating & shooting up at innocent Villagers, The villagers use to scare away to hell  those Gun holding CRPFs troops by throwing at them, bombs made from "BAANDAR KAKURA". It's a powder from a plant which is VERY VERY INSTANT STRATCHY. The Unavoidable Itchings caused by this powers, at their slighest touches, made those "Brave" CRPF jawaans & the Indian Polices run like Hell. :)

If Peoples will make up a Revoluting Mind, Nothing can Stop them. No matter what they have to face on the other side as an opponant.

Ever heard of Anarchism ? :)

A totally wrong idea that everybody in Kashmir has guns and that is the cause of militancy. If that had been the case then Kashmiris would have "decided" about their independence from India long time back and young children would not have any need to be shot dead by paramilitary for throwing stones at them. It is only the militants coming from across the border who have guns, most of the people in Kashmir are a practically defenceless lot.

Another wrong idea that guns can be used to "threaten" perverts, criminals etc. The guns are to be drawn only the moment you want to use them as per law (read Sections 96 to 106 IPC) for the purpose which they are made. If you think that just waving a gun will scare away the criminals, nothing is farther from truth. On the contrary the person facing the gun will think that you are about to shoot him and may do something very drastic to you in self defense.

"On the contrary the person facing the gun will think that you are about to shoot him and may do something very drastic to you in self defense."

Dear DI, if you point a gun at someone do you expect them to buy you an ice cream?

I have mentioned it only to highlight the fact that "threatening" someone can become life threatening to one's own self since you had mentioned "I did wish I had a gun to threaten every creep..........."