I need advice that my brother's daughter registered her marriage with a relative boy in June 2009.  The boy is the son of maternal uncle of girl's mother & it senses as brother-sister relation.   Can we challenge this marriage under the section of prohibited relationship marriage of Hindu Marriage Act.  The issue is now recently disclosed by both of them after 8 months.  Now the girl is not interested in the relationship. Kindly advice how to proceed.  I seek immediate remedy.

if the girl's (Bride) mother would have married the maternal uncle, then it would be a brother - sister relationship.  As you said it is not covered under " prohibited relationship". Can we challenge it in any way? worth challenging?

from the maternal side three and from paternal side seven piri in hindi take into account.

perhaps it is within prohibited relationship.

5. A marriage may be solemnized between any two Hindus, if the following conditions are fulfilled, namely:-

(iv) The parties are not within the degrees of prohibited relationship unless the custom or usage governing each of them permits of a marriage between the two;

(v) The parties are not sapindas of each other, unless       the custom or usage governing each of them permits of a marriage between the two.

(i)   If one is a lineal ascendant of the other; or

(ii) If one was the wife or husband of a lineal ascendant   or descendant of the other ; or

Explanation.-For the purposes of clauses (f) and (g),   relationship includes-

(i)   relationship by half or uterine blood as well as by full   blood;

The marriage already a void marriage, if the relationship exist as brother and sister.

It may be challange due to spinda relationship. but plz provide some more detail about relationship between mother of girl and father of boy. 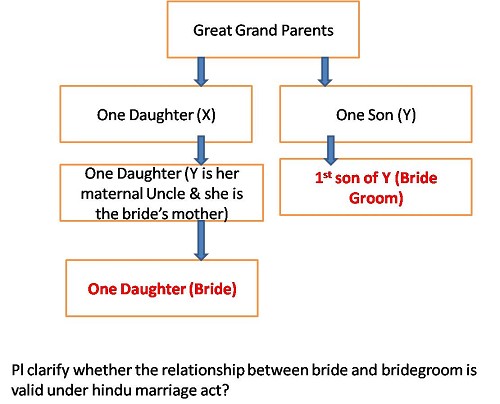 I am also having same problem,but in my case bride groom is Y's grand son(First son of Y's fisrt son)

please let me know can wwe marry legally as per hindhu marriage act, i alredy know we both fall under prohibited relation, but i want to marry her. please advice.

Consult your counsel before taking any decision.

can anyone plz tel me that sapinda relationship has a wider scope or prohibited relationship
? 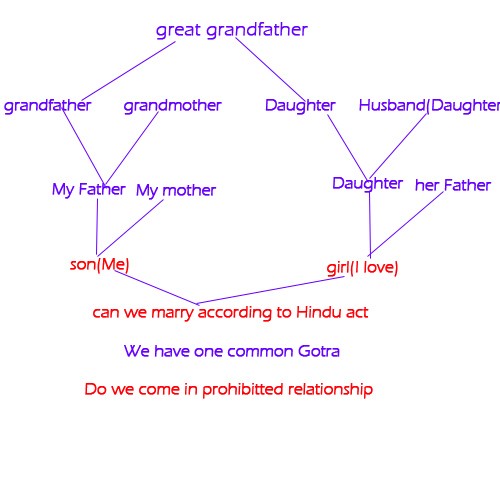 sir are we come in prohibited relationship

I am the guy.  My relationship wiht the girl is as follows:

In other words (If the above in not clear):

Do the guy and the girl fall in the sapinda relationship or not?

Bottom line, CAN THEY BOTH MARRY???

Please clear off our confusion. Thank u. 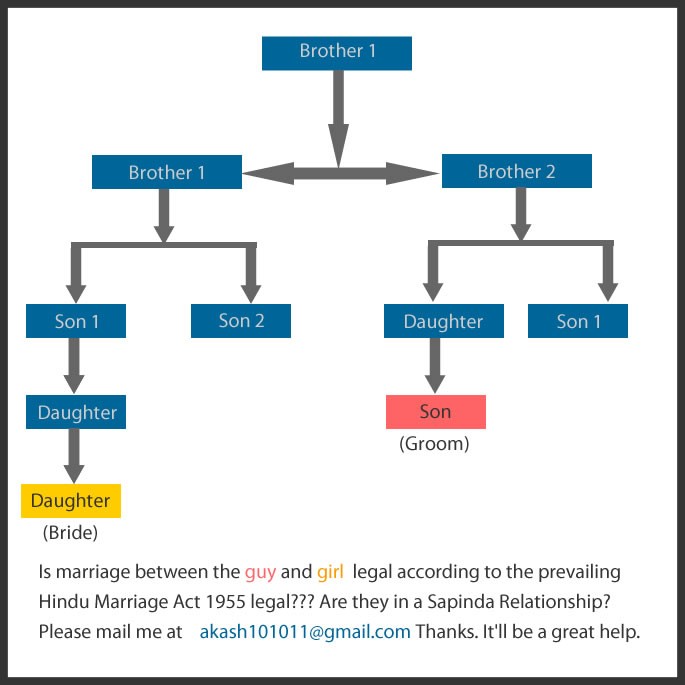