Need legal advice from any of the experts on this forum. This is regarding distribution and claim to father's property by children after father's death.

My name is Jamal Ahmed, i'm from Bangalore working as lecturer in a private college. We are practising Sunni Muslim family. I am the only son of my parents and I have 3 sisters who are married and well settled in their respective in-laws homes.

My father currently owns a big independent home in Bangalore worth Rs. 1 Crore. He has acquired this property through his own hard work and its not any ancestral property. As per a mutual discussion and agreement with my sisters, he gave each one of them Rs. 10 Lakhs as their one-time settlement and share in 2005. He had then decided that he will give me the independent home.

However, my sisters are now quarelling for more share of money and threatening to go to court. Their greedy husbands are behind this nasty behavior. I and my father are upset about this and want to find out:

1. What is the legal procedure by which my father can transfer this home to me in Bangalore? What papers are required? Who all should be witnesses to this transfer?

2. As per Muslim personal Law, my father has already provided my sisters their share of Rs. 10 Lakh each and treated it as full and final. All money was given in the form of Demand Drafts. Can my sisters approach the court now for claiming more share in property?

3. Can this home be transferred to me as a Gift Deed?

4. Are there any other fool-proof mechanisms by which my father can transfer this property to me, so that after his death no problems can be created by my sisters?

All responses to this query will be highly appreciated.

As per to Sunni Sect the son always gets twice that of the daughter thus the ratio is 2:1.   An Indian Muslim inheritance is considered as an integral part of Shariah Law Act 1937.

Under the customary Muslim law, a person cannot bequeath more than one-third of his property by will. But if he has married under Special Marriage Act, then he can will away entire property, and succession is governed by Indian Succession Act, and not the Muslim personal law i.e. Shariah Act 1937.

As long as the property is his own earned and not an ancestral one, and that he has already given 1/3rd to his daughters’ i.e. to your sisters  and 2/3rd he wants to keep for his son i.e. for you .  He has full right to do that by a Will which better to be registered and original to be saely-kept with the your local area sub-registrar’s office and you can have a copy of the same.

Please also note, he can amend/change/cancel his Will at any time during his life time, even without consulting you.

The Will must not be witnessed by you or any of your sisters/their husbands who are the direct beneficiary of his property but by any third party. Your concerned experienced lawyer can guide you how to make a valid will, who to witness it and how to formalize it.

There is no full proof mechanism in law, you can always expect protests by near and dear ones while probating the will and same stands for the Gift deeds too. At that time we the lawyers come to your rescue but  at a professionally charged fees.

hi this is  shaik.mahammad am from islamic sunni family i am adopted by my uncle(my Mothers broter) ,so father is having so much of propertys its came from my grand farher ,so legally  shell i have any rights on that paricular property? i have all documents in my ucle name only like ssc,PAN card,Adhar ,Dl ...Ect So give me anser plz......

You have been very clearly described by learned lawyer either Mr. Makkad sir or Mr. Deshmukh sir 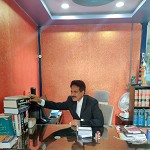 I am with Mr.Ibrahim Deshmukh sir, in appreciating his statement

@ Ibrahim Deshmukh. I think there no difference between earned and ancestral in Muslim personal law.And also untill one is alive he can do anything he want with his property whether it is earned or ancestral property. www.shareyouressays.com/117457/13-general-principles-of-inheritance-under-muslim-law-in-india Correct me if I am wrong
1 Like

Nephews are entitled only when there are no brothers and sisters.

In the given facts, son shall get twice of his sisters after deducting legitimate debt of deceased.

@ Ibrahim Deshmukh. I think there no difference between earned and ancestral in Muslim personal law.And also untill one is alive he can do anything he want with his property whether it is earned or ancestral property.

According to the Shariat law, a person can only leave one-third of their property to anyone they wish. The remaining two-thirds will, by law, go to their heir or heirs, equally shared between them.

Now, this is in case the person has more than one heir, and would like to leave an asset or property to just one of them. Although he can make a will asserting the fact that heir 1 will receive the asset, it will not be valid unless, after his death, heir 2 is willing to sign over the rights to heir 1.

In the given facts, son shall get twice of his sisters after deducting legitimate debt of deceased.

I stand with the opinion of Parvez.