Perjury allowed but how to execute (implement)

Respondent committed  offence  u/s.  191 and 193  of  I.P.C. by  filling  affidavit  with false statements therein during judicial proceedings before the Court

Hence Complainant filed  an  application  u/s.  340  and 195  of  Cr. PC  to prosecute  Respondent and the  Judge passed Order  :-    In view of the above I am inclined to allow the said application, in terms of the following Order :-

Registrar  to issue notice u/sec. 191 & 193 of I.P.C. to Respondent as why no perjury proceedings should be initiated against him. Application is disposes of accordingly

Note :- After some time of passing the aforesaid Order, the same Judge got regular promotion and transferred to other place

Thereafter  the Registrar sent Notice to Respondent’s known Residential address through concerned Police and Wife of the Respondent received Notice with following remarks in Hindi :-

But After 62 days,   the Registrar again issued same Notice and again Wife of the Respondent received Notice with same aforesaid remarks in Hindi

Complainant went to the Chamber of Honourable P.D.J. and drawn his attention to prosecute the Respondent by directing Registrar to file Respondent’s Complaint before C.J.M.

But P.D.J. directed the Complainant to the Registrar and Registrar told him to make proper application before same in-charge Court

What should he do 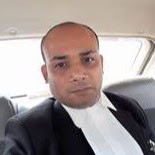 Dear client you should file a Writ petition before Hon'ble High Court against that better if you contact us then I will elaborate properly about your case.
Advocate Anurag Bhatt
Allahabad High Court
Mobile 9198889990

The Registrar is right.     The Court can become a Complainant even without sending a Notice.       A Complaint can be without an Accused even.    Courts take cognizance of offences, not offenders.       In this case Accused is there.     But he's untraceable.    No matter.

Make an Application requesting the in charge Court to file a Complaint.

Because my application u/s. 340 of Cr P C is dispossed off  with Order as above.

Should I file Misc. Application  or simple application or what  ?

Mr. Tarachand, The procedure adopted by the presiding officer itself was wrong. While allowing your application, he should have made a complaint (thru his reader) to the concerned court (having jurisdiction over accused address). Registrar has no role to show cause the witness, the court should have noticed to witness during the decision on your application. Now please move an application to the same court urging them to initiate the complaint against witness under S.340 CrPC attaching the copy of your allowed order.

You can also write that the notice is twice given by the registrar and served and even otherwise it is the court in front of which falsehood was committed is competent to file the complaint as per S.340 CrPC and sub section thereon.

Complaint of Perjury is filed only when the offence appears on face of the record.     The offence which requires inquiry is no perjury.     Giving Notice is unnecessary and redundant.       Notice is never necessary for lodging any Complaint whatever.

Yes, TGK REDDI, you are absolutely right. Without recording prima facie evidence on records by preliminary inquiry, if the court starts issuing notice of perjury, the court will not be able to cope with perjury casess, leaving the main issues in cold storage.

The False Orators should not be able to avoid, delay or escape punishment hence taking utmost care and hence this query :-

Advise can I make Cri MA in the manner as under :-

(Original Respondent and would be Accused

Application u/s. 340 of Cr PC  to direct Res. No.2 to comply with Order dated

Guide and Thanks in advance