Honesty is my birthright

Break your silence against corruption.

A mahatma announces fast unto death

Anna Hazare has given an ultimatum to the Prime Minister Dr Manmohan Singh to enact stringent anti-corruption law – the peoples “Jan Lokpal Bill”! Jail to the corrupt must become a reality! We have been betrayed by those that are leading us!

From 5th April at Jantar Mantar, New Delhi and hundreds of cities in India and Abroad

Who is Anna Hazare?

A soldier, lone survivor in his unit in 1965 Indo-Pak war, Anna dedicated his life to the well-being of society. A bachelor, an ascetic, he has no possessions, no bank balance and lives in a temple. He is a living Mahatma Gandhi!

In Maharashtra, Anna has single handedly transformed barren and dry regions into green and food surplus areas. He has fasted unto death on several earlier occasions. He forced the Maharashtra government to dismiss the corrupt - 6 ministers and 400 officers. Due to his fast, the govt enacted the Maharashtra RTI Act. In 2006, when government of India tried to amend the Central RTI Act, he again went on an indefinite fast and forced the Indian government not to amend RTI Act.

Leaders, organizations and the common man from across India will be with him. This is a do or die moment – let us make it happen!

This is a defining moment for India that can give our children a better future! Let us unite and stand by him! Thousands will be there to support him. Will you be there?

Anna’s appeal to the people:

When I sit on fast from 5 April, I urge my fellow countrymen to

·         Join me in fasting for one, two, three or whatever number of days you can comfortably fast.

·         Along with fast, please pray to God (whoever you believe in) for better and corruption free India. Collective prayers from all the people of India would definitely have a huge impact.

·         Write an impassioned plea to our Prime Minister that we look upon him to pass “Jan Lokpal Bill”, else we will be compelled not to vote for his party in next elections.

·         Remain calm and peaceful and develop the courage to go to jail, if required, in this next freedom movement.

If possible, come and stay with Anna at Jantar Mantar for a few days from April 5th.

Drafted by Justice Santosh Hegde, Prashant Bhushan and Arvind Kejriwal, this Bill has been refined on the basis of feedback received from public on website and after series of public consultations. It has also been vetted by and is supported by Shanti Bhushan, J M Lyngdoh, Kiran Bedi, Anna Hazare etc. It was sent to the PM and all CMs on 1st December. However, there is no response.

1.      An institution called LOKPAL at the centre and LOKAYUKTA in each state will be set up

2.      Like Supreme Court and Election Commission, they will be completely independent of the governments. No minister or bureaucrat will be able to influence their investigations.

3.      Cases against corrupt people will not linger on for years anymore: Investigations in any case will have to be completed in one year. Trial should be completed in next one year so that the corrupt politician, officer or judge is sent to jail within two years.

4.      The loss that a corrupt person caused to the government will be recovered at the time of conviction.

5.      How will it help a common citizen: If any work of any citizen is not done in prescribed time in any government office, Lokpal will impose financial penalty on guilty officers, which will be given as compensation to the complainant.

6.      So, you could approach Lokpal if your ration card or passport or voter card is not being made or if police is not registering your case or any other work is not being done in prescribed time. Lokpal will have to get it done in a month’s time. You could also report any case of corruption to Lokpal like ration being siphoned off, poor quality roads been constructed or panchayat funds being siphoned off. Lokpal will have to complete its investigations in a year, trial will be over in next one year and the guilty will go to jail within two years.

7.      But won’t the government appoint corrupt and weak people as Lokpal members? That won’t be possible because its members will be selected by judges, citizens and constitutional authorities and not by politicians, through a completely transparent and participatory process.

8.      What if some officer in Lokpal becomes corrupt? The entire functioning of Lokpal/ Lokayukta will be completely transparent. Any complaint against any officer of Lokpal shall be investigated and the officer dismissed within two months.

9.      What will happen to existing anti-corruption agencies? CVC, departmental vigilance and anti-corruption branch of CBI will be merged into Lokpal. Lokpal will have complete powers and machinery to independently investigate and prosecute any officer, judge or politician.

(This movement is neither affiliated nor aligned to any political party)

Some points for Fast Against Corruption on 5th April, across

1. The fast/protest/sit-in/rally will be held under the banner of 'India Against Corruption'. Many organisations who work in different fields are joining the movement and they are free to bring in their own placards and posters but the main banner will be that of India Against Corruption (Photo attached for banners/posters)

2. This is a peaceful fast and not against any particulal Govt, party, organisation or individual but the system and our only demand is to push for Jan Lokpal (the lokpal bill drafted by the members of civil society)

4.  We must explain important provisions of the Bill drafted by us to the public so that public knows why they should support our Bill. We should also explain deficiencies of present anti-corruption systems and the government’s draft lokpal bill.

5.  We can create a strong demand that we all will vote only for that party which enacts Lokpal Bill.

6. This is a citizens movement and therefore please avoid references that have political/religious connotations.

7. Inform the local media about the fast in your city and also tell them that this is a part of a nationwide protest being held in major cities in on the same day.

8. Please upload pictures and a small descripttion of the event after it is held on https://facebook.com/indiacor or mail us at indiaagainstcorruption.2010@gmail.com

9. Most important, spread the word, tell you friends, family, colleagues, neighbours and others about this citizens’ movement.

Thanks for your post. It is time for all Indians seeking corruption free country to join Shri Anna Hazare and make this rougue govt. headed by a PM who keep saying he does not know about CWG, 2G corruption and goes all out to protect the thugs like A Raja, Suresh Kalmadi. Imagine what could have been achieved if the money involved had gone for welfare of people but went in to pockets of thugs that we have amongs politicians.

Take for example and Imagine the plights of tenants who are lefy high and dry in spite of filling petitions in High Court for non grant of permission by BMC ( a most corrupt body) but judges  just pass silly orders asking BMC to act in the matter and unilaterly decide that the petitions are infructious there helping the corrupt BMC officeres who device new ways and do nothing in the matter. Poor people who spend huge amount on such petitions are left high and dry due to such rouge judges and judiacial system of the country. In real sense we are not free but slaves of thugs and pimps who joined politics and looted country.

Yesterday I was shocked to see on Times Now channel where in some panelists were questioning the creditability of other panelists who were all praise for the success achieved by Shri Anna Hazare. Unfortunately we have no dearth of such thugs or pimps who always compromise and help corrup politicians. Before questioning creditability of Pritish Nandi or Rishi Kapoor they should question their own creditibility. We don't expect people of this country to be saints but they did stood for a great cause and that is what matters as it forced madam and her pupet PM to bow to public cause.

Having said so, I wonder what about the rampant corruption in state governemnts and the way these thugs are taking over land at the cost of penuts and helping criminals for personal fortune. The Lok Ayukta is nothing but a reward fior doing nothing and spending crores. They have email ids but are not bothered to respond to the mails sent  and protect the corrupt persons. The Lokayukta of Maharashtra spends crores of rupeees but results are zero as the moment you enter the office the peon asks "Sahebansi olkhan aahe ka ?

Some thing must be done at state levels as well to set right these thugs in govt. and govt. depts.

Absolutely correct, in real sense we are not free. We are controlled by the politician bureacrat nexus. They disarm us in every concievable way. People need to understand the very basic difference between freedom and slavery. 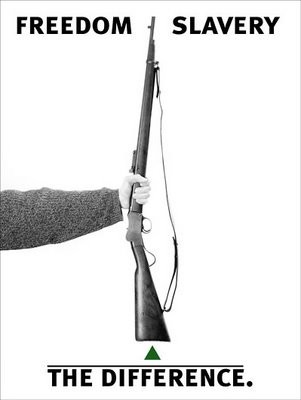 "People willing to trade their freedom for temporary security deserve neither and will lose both."-Benjamin Franklin

"Both the oligarch and tyrant mistrust the people, and therefore deprive them of arms." - Aristotle


"Among the many misdeeds of the British rule in India, history will look upon the act depriving a whole nation of arms as the blackest." --M. K. Gandhi

Democracy is not freedom. Democracy is two wolves and a lamb voting on what to have for dinner. Freedom under a constitutional republic is a well armed lamb contesting the vote. Freedom comes from the recognition of certain rights which may not be taken, not even by a 99% vote.

the public had paved the WAY for evil for individual, vested interest .NOW it is the public democratic joint focused aim only which can erradicate this evil. ONe man alone can not succed ;