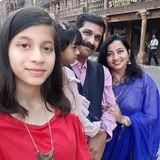 No copy of the notice or even no notice is minor issue after recent SUPREME COURT  judgments .

SC says that in such cases the court summons should be treated as notice and accused should pay after receipt of court summons.

In cheque cases you have to fight on technical issues which are many.

If you say you have not received notice than in that over confidence you overlook and put aside all other reasonable and legal defenses which amounts to your admission and case is lost.

serving legal notice to accused is mandatory to attract the case of 138. this case is not maintainable as per NI Act.

When you deal with special laws then it is essential to remain updated with higher court citaitons.

Please note what APEX COURT has to say in such matters.

17. It is also to be borne in mind that the requirement of giving of notice is a clear departure from the rule of Criminal Law, where there is no stipulation of giving of a notice before filing a complaint. Any drawer who claims that he did not receive the notice sent by post, can, within 15 days of receipt of summons from the court in respect of the complaint under Section138 of the Act, make payment of the cheque amount and submit to the Court that he had made payment within 15 days of receipt of summons (by receiving a copy of complaint with the summons) and, therefore, the complaint is liable to be rejected.

A person who does not pay within 15 days of receipt of the summons from the Court along with the copy of the complaint under Section 138 of the Act, cannot obviously contend that there was no proper service of notice as required under Section 138, by ignoring statutory presumption to the contrary under Section 27 of the G.C. Act and Section 114 of the Evidence Act.

In our view, any other interpretation of the proviso would defeat the very object of the legislation. As observed inBhaskaran's case (supra), if the 'giving of notice' in the context of Clause (b) of the proviso was the same as the 'receipt of notice' a trickster cheque drawer would get the premium to avoid receiving the notice by adopting different strategies and escape from legal consequences of Section 138 of the Act.

can you communicate me the citation which you have referred case no date of judgment etc in "Bhaskara case" SEc 17 K.G. Bhaskaran Cjj. RV ravindran DK Jain Supreme court of India under which"Any drawer ......... within 15 days of receipt of summon from the court..Make payment of cheque amount and submit to the court that he had made payment within 15 days of receipt of summon therefore the complaint is liable to be rejected"

In case of my client I  had with the permisson of the court deposited the cheque amount in the court within 15 days of receipt of summon and got bail for my  client .Can the case be closed or plaint of complainant rejected? May please like to respond.

Following the details of above citation.

I am sorry to say and with due respect, that Hon Supreme Court has miserably failed even with respect to presumption under S.139.

The bench of the then CJI (cited order also), passed few orders with respect to NI Act, which look more than questionable...

Order 1 : The liability and presumption aspect was not defined and not clarified, but ruled that the said presumption is for legally enforceable debt and liability. Half cooked order.

Order 2 : Regarding compounding, well least said is better about this order. The order said accused can compound even at SC level by paying X % more amount, what if complainant says no to compounding ? (not answered by SC). Compounding is something between accused and complainant, there is no role of court to fix some funny, baseless rates as X% or Y%. What if accused is punished for 1 year, now complainant says come on give me 1 crore I will compound, so ideally the compounding cannot be done after the trial court has passed the final judgement, because it may lead to patent blackmailing by complainant.

When the law says that notice must be given by payee or holder etcc... Where is the jurisdiction with SC to overrule this, by such order ?? At the best SC can say by referring to general clause act that proof of dispatch of notice is sufficient compliance, but it cannot rule  that no notice required. SC cannot refer the departure of giving notice, SC should realize that affidavit of complainant and treating the same as examination in chief in absence of accused, is a clear departure from criminal law. Law is law, where is the question of departure, SC has the power to declare it ultra vires, but cannot add / delete or give fancy explanations.

This is huge, people from Kanyakumari are coming to Delhi to defend. Even CrPC says that a trial court must investigate before taking cognizance against a person not residing in the jurisdiction. Here people are being summoned even when state HC has no jurisdiction over them.

So no notice, no case, period.  And we have defense counsels who agree that now no notice is required, court summon is to be treated as notice.

It is most unfortunate that Hon SC is letting lacs of people (50 Lacs + accused under S.138) suffer the ignominy of accused, just to give the respectability to a piece of paper. Courts are to be blamed not the law. Law is perfect and very simple, courts have goofed it up. It is embarrassing that S.139 is not rightly interpreted by the courts, even SC. It is unbelievable that if accused admits his signature than it is almost proved against him that he issued the cheque to clear the liability amount as stated in the cheque, without any proof from prosecution. This interpretation violates many sections of IPC etc.