what a beautiful gift

Mr. N.K.Assumi send a beautiful gift to me .

Thanks Mr. N.K.Assumi for the gift .

2day also i verified whetehr iam in 30 to get assumi's wonderful gift. its not the quality or quantity it is the friendship we love. Thanks assumi for such a beautiful stop. KC

read as step not stop KC

Than K You Very much Dear Assumi ,

I  have recieved  your beatiful gift , it is  hear touching !

I am very  happy that  through LCI  I have a good friend  at disatance place  with in India         and he is  by profession Advocate and having much concenr  about me and  all other advocates !

Thank you once again !

I  too received your pulchritudinous gift today!!!!
Thank you for the lovely gift,The gift is great, but even more,It’s your thoughtfulness I treasure.....Thanks for your kindness and friendship.

It is really a pleasant surprise to receive your gift today. Many members may not know what the surprise gift is all about. It is the great "NAGA SHAWL".

What is Naga Shawl is all about? Here is what we find in Wikipedia,

Naga Shawls are the hand woven traditional black, red and white combination shawls used by the tribes of Nagaland. It symbolizes a specific tribe and the wearer’s status in the society. Each Naga tribe has its own signature shawl. These beautiful shawls are the sole product of the Naga women’s creativity and wisdom. The threads are taken from the barks of plants that come up during the monsoon season. It is pried apart and then dried, boiled with ash, stretched, dyed and rolled on spindles before the actual weaving.

Thanks Dear! This gift is priceless and shall remain with me for the rest of my life.

NAGALAND: Situated in the northeastern part of the country, Nagaland is an important part of the colourful culture of India. A Naga shawl is the most important part of the dress and is woven with cotton and staple fiber, though some wool is used. Shawls vary from simple white ones to elaborately designed ones with symbols and colours. The tsung kotepsu has a white woven band stitched along the centre of the shawl and is woven over with figures of elephants, tigers, mithuns, cocks, and circles, representing human heads. It has horizontal black, red, or white stripes. A rich and brave man's acquisitions and achievements are picturised on it. The lotha naga shawl is woven in nine parts and stitched together. Many traditions and beliefs are associated with the weaving and wearing of the traditional dress. When a Konyak woman gets married she wears a shatni shawl which is preserved and used only to wrap her dead body. Convention demands that a rongtu shawl be worn only if the mithun sacrifice has been conducted over three generations.
The Naga shawl is the most important part of their dress. Each tribe has its own patterns with simple clean lines, stripes, squares and bands being the most traditional design motifs. Naga fabrics retain their original attractive patterns, yet external influences on colour and design are also evident.
Procedure of making Naga Shawl
The looms used are mostly narrow loin looms. Technically, Naga loom consists of a simple back-strap with a continuous horizontal warp consisting of six sticks serving as the warp beam, lease rod, heald stick, beating sword and extra warp beam. Loin loom products mainly shawls are woven with a rayon weft. The Naga shawl weaving is done mostly with cotton , the staple fibre though some wool is used. The centre of the shawl is woven over with figures of elephants, tigers, mithun, cocks and circles, representing human heads. The fabrics are dyed in indigenous colours. 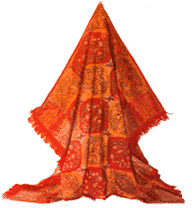 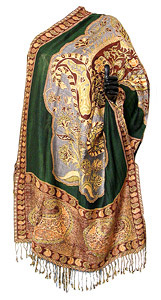 
Likes: 66
Points: 5008
Dear Assumi. just now i recieved the gift, Thank you for the lovely gift; You have a good and gracious heart, I love this, and I think of you With fondness and with pleasure; The gift is great, Please accept my sincerest thanks.
Reply
On 21 October 2009

The most prominent item of Naga dress is the shawl. It is different for every tribe and besides, there are varieties  and sub-varieties in every group. A warrior's shawl or shawl of a man who has performed the Feast of Merit, is different from that of an ordinary villsager.

The common pattern among the Angamis is red and yellow (now being replaced by  green)  bands, on black cloth called Lohe. The western Angami villages have their own distinctive pattern. Lothas have a streamlined  gradation of shawls indicating the number of gennas performed by the wearer. Thus a man who has performed  the first genna wears the phangrhup, its strips being widened, after the second genna. The third genna entitles the man to wear the Ethasu, while after the series of feasts is completed and the stone-dragging done the man can wear the Lungpensu, which is a dark blue cloth with five stripes of light blue and with narrow marginal stripes on each side.

The Ao warrior shawl called the Tsungkotepsu with figures of mithun, tiger, elephant, human head, cock, Dao and spear is strikingly picturesque. Each of these figures is symbolic; mithun representswealth of the wearer, the elephant  and tiger denote his prowess in hunting and the human head signifies success in taking heads. These patterns are painted in black on a white band, while the cloth itself is of dark blue colour.

Among the Changs, the unmarried boys and girls wear the Kaksi nei, while the newly married couple sport the Silang nei. Another variety of Chang shawl, the Tobu nei has zig-zag patterns in alternate red and black on a blue band.

In the past  it was possible to identify, by simply looking at the shawl of the wearer, the tribe he belonged to and occasionally even the group of villages he came from, his social status and the number of gennas he had performed. But nowadays  this identification is not possible.

Apart from the shawl, the normal working dress is a kilt  which is generally of black colour. It may be embroidered with cowries in which case it is looked upon as a distinctly male dress. The cowries are rubbed on stone before being embroidered so that they may stick well, and they are always sewn by  the man using the cloth and never by his wife or anybody else. The cowrie decoration is quite popular among the Nagas and it imparts to the kilt the character of toga virility, signifying his success in love or war.

Members can view the preparation of Naga shawl in the below Youtube video.

I just highlighted about the Naga Shawl to show the valuable gift chosen by Assumi. However, seems this has diverted the main discussion, which is to thank our friend Assumi. Hence I would request members to honour the donor instead.