Some key amendments to Code of Criminal Procedure come into

The Code of Criminal Procedure was amended by Bill No.LXXX-C of 2006.  However, the Amendment Act had not been brought into force so far.

The principal amendments are:

·         “Victim” is defined and will now be permitted to engage an advocate to assist the prosecution as well as to file an appeal;

·         Stipulating that an arrested person shall be examined immediately by a medical officer;

·         Prescribing that the statement of a victim of rape shall be recorded at her residence and, as far as practicable, by a woman police officer in the presence of the victim’s parents or guardian, or a social worker;

·         Mandatory inclusion of statements of witnesses under Section 161 in the case diary;

·         Stipulating that the trial of an offence under Sections 376 to 376D IPC shall, as far as possible, be completed within two months;

·         Revision of the tables under Section 320 CrPC regarding offences which can be compounded and the person by whom offence may be compounded;

·         Providing safeguards in the case of an enquiry against a person of unsound mind;

·         Incorporating a new Section 357A obliging every State Government to prepare a scheme for providing funds for compensating the victim of a crime or his dependents;

·         Providing for execution of bond by a person seeking bail pending an appeal.

Some other provisions have also been amended.

The above amendments have been notified and they will come into force on .

Three provisions are not being notified for the present.  These are Sections 5, 6 and 21(b) of the Amendment Act.  They relate to the power of a police officer to make an arrest and the power of the Court to grant or refuse adjournments.  Representations were received against these provisions.  Hence, they were referred to the Law Commission.  The Law Commission held consultations and submitted its report.  On the basis of the report an Amendment Bill has been approved by the Cabinet. It could not be introduced in the last session of the Parliament and will be introduced in the Budget Session.  Pending the passage of the Amendment Bill and pending a debate in Parliament, it has been decided not to notify these three provisions for the present.

THANKS FOR NEW YEAR GIFT TO ACCUSED INNOCENT VICTIMS.

ON THE EVE OF NEW YEAR.A BEST GIFT TO THE VICTIM'S WHO HAVE ACTUALLY SUFFERRED. 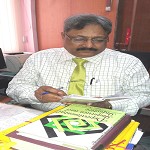 What is the name of the news paper which published the news about CBI official rajesh Ranjan and on which date it was published? Kindly inform the source of the news item.