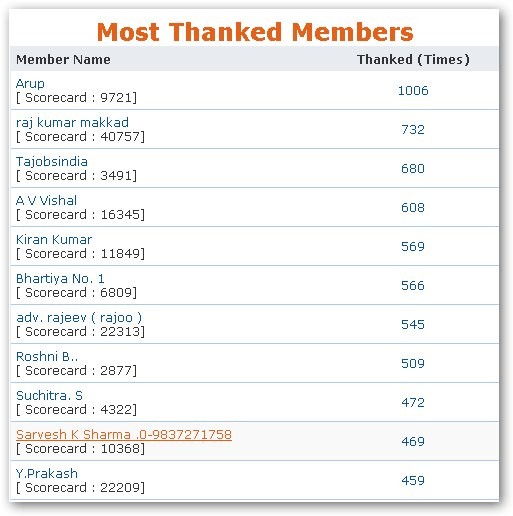 Congrts Sir,  You are a Tendulkar of Lawyers club India.

YOUR PEARLS OF WISDOM  REALLY DESERVE THANKS.I M ALSO SPONSORING ONE IPOD FOR YOU FOR THE NEXT MONTH SO THAT U CAN SCORE A  HATRICK!!!!!!!!

comparing arup with sachin, don't insult sachin tendulkar, who is the living legend in his filed and received kudo from not less than legends like don bradman and vivian lara as the best ever in cricket history.  sachin is famous for his skills on field and equally famous for his humbleness in personal life.

But arup is quite opposite.  he is arrogant and abusive.  he is illeterate in law and a quack.  he does only copy and paste the things with a single line with irritating and irrelevant remarks.  he does not know the etiquette of net citizen.  he always writes the entire post in capital letters, which is treated as abusive in the world of netizens.

above all, he preaches immorality to the people on the web site, always exhorting them to go for live-in- relationship, saying that the supreme court has given license to do so, which is totally false.  he tells the men to go livein relationship with widows and unmarried women indicating that men can exploit them by doing so and can walk out of the relationship without any strings attached.  he is immoral.

there is no doubt, thousand thanks is less for him, he is entitled to get manymore thanks from a single thread, because in every thread he sends several posts with a single line and gets one thanks for each post making not less than five thanks for a single post.  there is no election commission to stop this gimmick.  there is no legal expert committee to stop him giving illegal advises.

May god save this LCI from these quacks and immorals.

If satoriye can recommend their pantar (under world ki language me pantar means shooter on hire) (shatranj ka pyada) Sachin Tendulkar's name for BHARAT-RATNA, Arup ji's claim is more solid for it.

I find him an honest and straight forward person. What he see, what he feels THAT HE SAYS.

If on some task Im disagreed it doesn't mean that he is wrong, as I may also be wrong.

What is important is that we should express our thoughts freely & fairly and we are free to accept it or not accept it.

HE DESERVES THESE THANKS.

SINCE OPPOSITORS GIVE ME MORE OPPORTUNITY TO MAKE MY SELF CORRECT AND TO REACH A VICTORY.

Hema it is not my intention to insult Sachin.  Je has got 1000 thnaks  and I am not doing any maska to him and I wont do such things.