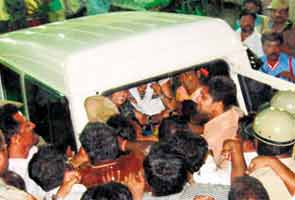 Bangalore:  In another case of dowry related issue, a wedding was stopped mid-way as a result of demands being made by the groom and his family, even as relatives and guests waited at the marriage hall.

B P Swetha and Amit V Rolli, both doctors, were scheduled to wed at 6.30 pm on Tuesday. Despite the presence of hundreds of relatives and friends, Amit and his family began arguing with Swetha's family about the marriage hall and other issues even before the marriage could begin.

The marriage was fixed three months ago and the couple was engaged for the past three months. According to Swetha's relatives, immediately after the engagement, demands began to pour in from Amit's family.

Swetha's parents KS and B S Puttachannappa had already agreed to some of the demands and had also spent Rs. 3.5 lakh on the wedding arrangements so far. "The boy was given Rs. 5 lakh as dowry along with a 30x40 site.

Persistent demands were being made for something or the other from time to time. Everything was arranged and today the boy and his parents began complaining about the marriage hall and rooms for the guests. At the last moment we booked 18 A/C rooms at a nearby hotel, but they were still not satisfied," said a relative of Swetha.

Swetha's father Puttachannappa said, "We have spent around Rs. 50,000 for transport and around Rs. 3.5 lakh for the wedding."

He added that Amit's family had given him a list of demands and told him to ensure that all dowry articles were brought to the marriage hall for display.

Several rounds of meetings between elders of both families failed to bring about a solution.

Swetha refused to marry Amit after what had happened and the family decided to file a complaint. A case has been registered at Basaveshwar Nagar police station and Amit, his parents and a few of his relatives were taken to the police station around 12.30 am.

shame on Swetha...Why she agreed to marry such a greedy person if he begged 5 lacs?

girls must learn to evaluate themselves first.

This was clear writing on the wall....which a well qualified woman and her parents had ignored!

who knows what is real truth

@Manjit, who say what is the real truth?  Isn't it obvious?  Why would the girls family backout and make a police complaint?  It can clearly be seen to be the last resort after earlier meeting demands which in our society is considered 'normal' part of wedding arrangements and not seen as 'dowry'.  The girls family is not mad not to understand the repercussions a false police complaints will have on their daughters future.  Our society will only change when more and more of those good souls come forward to marry such girs who have walked out of such situations.

Thegirl and her family should have backed out when the dowry demand was made by the boy's family. Society would also change when girls and parents, at lest well qualified girls and thier families start saying a big NO to dowry denamds.

real truth can be anything, wait n watch and follow the case.