A claim petition filed on behalf of deceased's wife and two chilren, which was allowed and award has been granted. Thereafter the father of deceased moved and application for Review, which was also allowed, Suject to amendment in the order of award.

What remedy lies to the father of deceased? 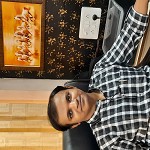 Sir, father is not legal heir but a dependant, that is why he is entitled.