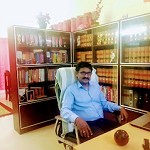 Application under section 6(1) of right to information act.

Office of the Hon’ble Registrar General,

Kindly provide me the following information sought for, by means of FIVE questions. Kindly note that the questions that I have asked herein below are not hypothetical. My displeasure / dissatisfaction over the working of the present justice delivery system has forced me to obtain information from your esteemed office by raising those questions.

Judges enjoy so much respect because of their powers, but they are not easily made liable even for their intentional wrong decisions. Litigants are, day by day, losing faith in the justice system in absence of any practically possible mechanism to redress their simmering grievance against the corrupt judges because of their fear of being further victimized by the opponent / offenders with the support of the errant judges. The Judiciary is supposed to instill faith and confidence in the mind of litigants that the justice would be administered purely in accordance with law and not in accordance with the mood of judges in every case, irrespective of the social status of any of the parties involved in a cause. Otherwise, the people are likely to be constrained to adopt violent self-help to secure justice ( ! ) which would lead to chain of offences and ultimately the concept of “Might is Right” would unfortunately be justified in spite of there being a civilized Justice Delivery System and the common man would have to rely upon the mercy of the Almighty God to get justice leaving aside the Justice Delivery System.

II. Reason for Question No.2

The Judiciary initiates contempt proceedings against certain words/deeds spoken or done by the so-called contemnors perhaps because of disappointment over the biased attitude of a certain judicial officer or for some other reasons, by considering that such an act amounts to assault on the entire judiciary. Yes. It is true and correct. However, there are some judicial officers whose acts themselves amount to contempt of their own Courts and thereby causing injustice to the common man by abusing their powers.

Q.2 WHETHER THE JUDICIARY WHICH HAS RECRUITED SUCH OFFICERS WHO TURNED OUT TO BE CORRUPT, WOULD MAKE ITSELF VICARIOUSLY LIABLE AND COMPENSATE TO THE VICTIMS, IF ITS JUDICIAL OFFICERS ARE FOUND TO HAVE BEEN WORKING FOR EXTRANEOUS CONSIDERATION AND THE LITIGANTS HAVE THEREBY BEEN FORCED TO APPROACH SUPERIOR COURTS OF LAW, JUST BECAUSE THE CAUSES FOR LITIGATION WERE DELIBERATELY CREATED BY THE CORRUPT JUDGES, MUCH AGAINST THE TRUST REPOSED BY THE LITIGANTS THAT THE JUSTICE WILL BE ADMINISTERED BY THE JUDICIARY IN A FAIR AND SPEEDY MANNER?

III. Reason for Question No.3

The litigants are expected to pay considerable amount of money towards Court fee so as to get their disputes adjudicated in accordance with law.

Q.3 WHETHER COURT FEE IS EXPECTED TO BE PAID BY THE LITIGANTS TOWARDS SERVICE CHARGE FOR THE SERVICE RENDERED BY THE COURTS OF LAW FOR ADJUDICATION OF THEIR CASE OR FOR SOME OTHER PURPOSE?

IV. Reason for Question No.4

Law is certain and remains unchanged during and even after a Trial, Revision and Appeal, etc. unless the same is amended retrospectively. However, the litigant is made to run from pillar to post sometimes by intentional wrong interpretation of law by judicial officers or ignorance of law by the judges themselves or because of corrupt mind of certain persons working in the court of law, etc.. Doctors themselves are held guilty of medical negligence and liable for deficiency of service under Consumer Protection Act, in spite of unstable condition of human body.

Q.4. WHY DOESN’T THE JUDICIARY  MAKE STEPS TO BRING ITSELF WITHIN THE AMBIT OF THE CONSUMER PROTECTION ACT SO AS TO ENABLE ITS JUDICIAL OFFICERS TO REALIZE THEIR HOLY TASK OF ADMINISTRATION OF JUSTICE TO BE DISCHARGED WITH MAXIMUM AMOUNT OF CAUTION ON ACCOUNT OF THEIR CORRESPONDING LIABILITY?

V. Reason for Question No.5

Gone are the days when people who were really aggrieved by the wrong-doers, errant public servants etc., used to approach Courts of law seeking for appropriate remedies. However, nowadays, in most of the cases, actual victims are being deliberately forced to approach Courts of law by the wrong-doers themselves hoping that the victims cannot have easy access to justice system, more so, the hon’ble apex court is only in New Delhi whereas the innocent victims far away in remote areas in various States in our country, cannot easily go even to the Capital city of their own District or State. There are number of litigants in the country with so many doubts/ questions about fair administration of justice with their limited resources for handling their litigation in the Courts of law. Wrong-doers including some errant Public servants (!) get united and can easily handle their litigation, if required, at the cost of public. However, the innocent victims are further victimized by the public servants by deliberately forcing them to approach courts of law and thereby indirectly and intentionally delay the remedy which otherwise the common man is very much entitled to get it even without approaching the courts of law. The burden of judiciary becomes heavier thanks to the unnecessary litigation by and at the instance of the irresponsible corrupt public servants and also by the incompetent judges in the subordinate judiciary who deliberately create causes for future litigation, by rendering wrong decisions only to satisfy their ego even without recording lawful submissions and also the binding precedents cited by the learned advocates.

Q.5 WHETHER THE REGISTRY OF HON’BLE MADRAS HIGH COURT WOULD TAKE SINCERE STEPS TO CALL FOR THE SUGGESTIONS FROM THE PUBLIC IN A TRANSPARENT MANNER INCLUDING COMPLAINTS ON WORKING OF OUR JUSTICE DELIVERY SYSTEM AND FILE A PUBLIC INTEREST LITIGATION BEFORE THE HON’BLE SUPREME COURT OF INDIA ON THE BASIS OF SUCH SUGGESTIONS, TO BRING ABOUT JUDICIAL REFORMS IN ITS REAL SENSE SO AS TO MAKE CORRUPT AND INDIFFERENT PUBLIC SERVANTS / JUDGES SERIOUSLY LIABLE FOR HAVING CREATED UNNECESSARY CAUSES FOR LITIGATION JUST TO HARASS THE PUBLIC/ LITIGANTS?

I am enclosing herewith the Court fee for an amount of Rs 10/- (Rupees Ten only) towards RTI application fee and hereby undertake to pay the required amount of additional Court fee on intimation from your end.

I state that the information sought does not fall within the restriction contained in Section 8 & 9 of the RTI Act and to the best of my knowledge, it pertains to your office.