Dhanraj v. Smt. Suraj Bai (1975) - If a step-mother can give a step-son in adoption in the absence of natural parents

Brief :
The Court discussed Sections 4, 6, 9 and 11 of HAMA and then carefully gave the judgment. It held that the scheme of HAMA is not to make a child of 15 years of age or above fir to be taken in adoption. The exception however is made in favour of custom or usage to the contrary. The court dismissed the appeal and there was no order as to costs.
Citation :
Petitioner: Dhanraj Respondent: Smt. Suraj Bai Citation: 1975 AIR 1103

I) If a step-mother can give a step-son in adoption in the absence of natural parents?

II) If not, is the adoption void?

III) If a major could be given in adoption? 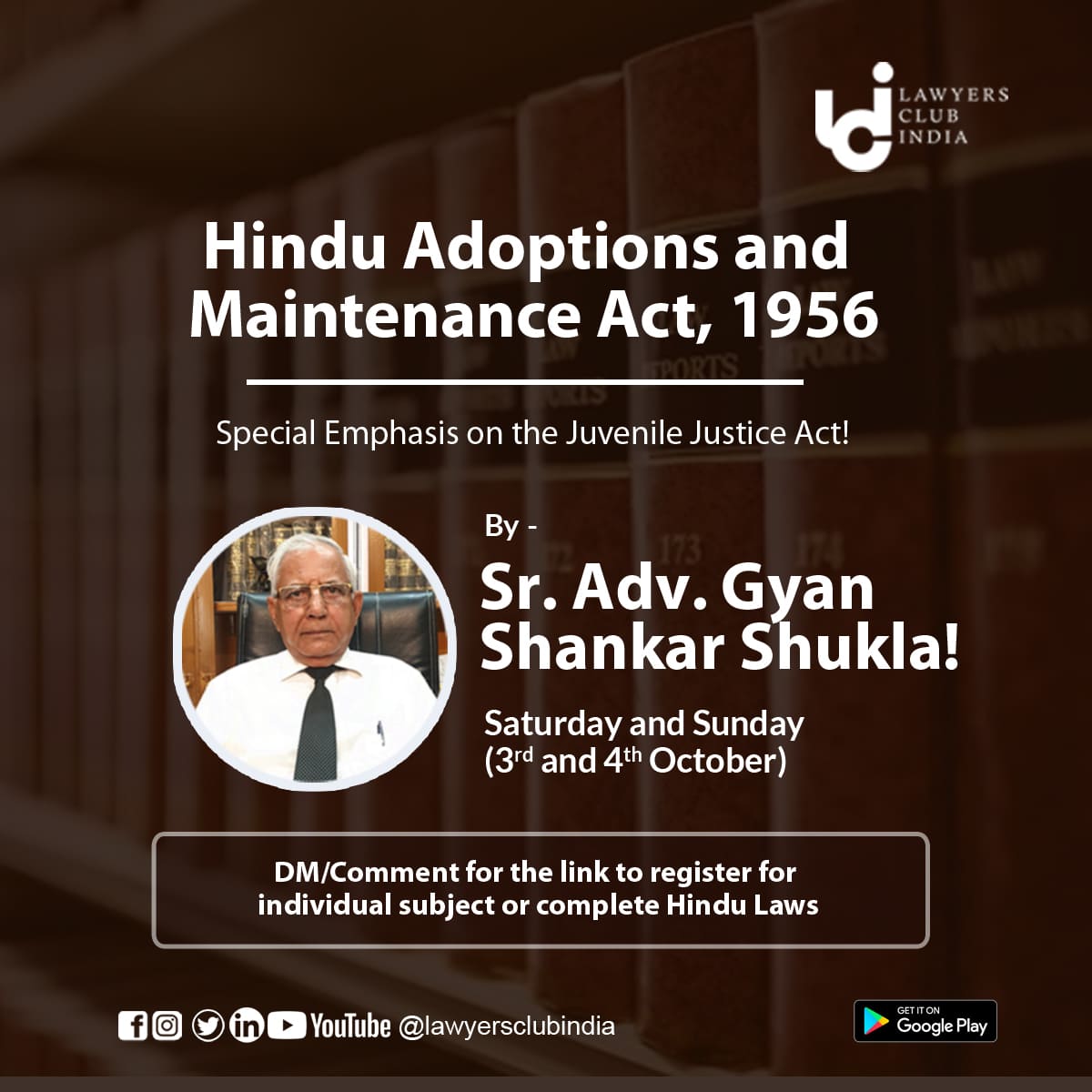 • Both his natural mother and father were dead, he was residing with his step-mother Bhuri Bai at the time of the impugned adoption. The appellant was given in adoption by his step-mother.

• Subsequently the respondent’s husband and the respondent filed a suit in the year 1963 against the appellant impeaching his adoption on various grounds and for declaration that the adoption was illegal and invalid.

• The appellant contested the suit and, inter alia, pleaded a custom applicable to the parties according to which a person being of the age of 15 years or more could be taken in adoption. The custom was pleaded in the view of provision of the law contained in clause (iv) of Section 10 of HAMA, 1956. the appellant also stated in his written statement that, under HAMA the step-mother was competent to give him in adoption.

• The Trial Court decided the issue in favour of the plaintiffs and against the defendant. The latter filed a first appeal in the High Court. During the pendency of the appeal Amichand (respondent’s husband) died. the High Court held that the step-mother was not competent to give the appellant in adoption and maintained the dismissal of the suit on the preliminary issue.

• The appeal was then filed in the Supreme Court of India.

• In the case of an adult orphan, as appellant was at the time of adoption, no consent was necessary of any person except the adopter himself. Nobody could be available to give him in adoption.

• Even under the old Hindu Law the adoption of an orphan was not valid except by custom; but if the custom permitted it, and in the case of Porwal Jains it did permit, then an orphan who was not minor could go in adoption by his own consent without the consent of or even the giving by anybody else.

The Court discussed Sections 4, 6, 9 and 11 of HAMA and then carefully gave the judgment. It held that the scheme of HAMA is not to make a child of 15 years of age or above fir to be taken in adoption. The exception however is made in favour of custom or usage to the contrary. The court dismissed the appeal and there was no order as to costs.

The use of the word "child" in clause (vi) of section 11 and in section 9(1) read in contrary-distinction of the use of word "person" in clause (iii) of section 6 would make it clear, counsel submitted, that the condition of giving in adoption is applicable only to a minor child and not to an adult. We see no substance in this argument. Under the law as engraved in section 10 of the Act, a person is not capable of being taken in adoption if he or she has completed the age of 15 years and that is the reason that the word "child" has been used in sections 9 and 11. The use of the word "person" in section 6(iii) and at the commencement of section 10 is not for the purpose of bringing about any difference in law in regard to the giving of the child. If the custom permits a person of the age of 15 years or more to be taken in adoption then even such person would be the child of the father or the mother. 'Child' would not necessarily mean in that context a minor child. If the child is a minor, in absence of the father or the mother, a guardian appointed by the will of the child's father or mother and a guardian appointed or declared by a court, would be competent to give the child in adoption. But in case of a major in absence of the father or the mother, no body will be competent to give him in adoption because no such provision has been made in the Act to meet such a contingency. The scheme of the Act was not to make a child of 15 years of age or above fit to be taken in adoption. Exception was made in favour of a custom to the contrary.

We think that it would be a ticklish and debatable question to decide whether the second part of clause (a) of section 4 would have such a custom from the overriding effects of sections 6, 9, and 11. But it will be a futile exercise her-, to embark upon the decision of this point as in our judgment it does not arise at all in this case. In paragraph 4 of the written statement the only custom pleaded was that a person more than 15 years old could be taken in adoption. Nothing was pleaded to say that there was a custom of giving an orphan in adoption or that a person above the age of 15 years could go in adoption without the physical act of 'giving by anybody, on his own and with his consent only. On the other hand the pleading in sub-paras (1) and (1) A.I.R. 1921, Bombay, 147 (2) A.T.R. 1958.'Bombay, 79.(3) of paragraph 4 of the written statement was that under the Act the step-mother was competent to give the defendant in adoption and that she did give him in adoption. It was not open to the appellant, therefore, to take this new point of law for the first time in this Court without the foundation of facts to found it upon.