I have a query regarding my plot in Bangalore.

I bought a plot in Bangalore in 2014 .I did not get the documents verified as the next plot is bought by my friend few years back.now my friend is planning to sell it and he is finding a problem in selling it due to improper property descripttion in the Schedule.

In this case, you can get a rectification deed signed by the original landlord on one side and your friend and you on the other side. You will be signing the rectification deed as successors-in-interest to the intermediary re-seller.

Hopefully this should solve your problem.

Contact the vendor and get a rectification deed registered through a local lawyer.

thank you for the quick reply

From D my self and my friend bought the plots with the same mistake continued.

now we realized the mistake, however we dont have a trace of B and C, but we know the landlord A,who made plots from his land and sold.,and we also know the last person who sold the plots to us which is D,

Thank you for your support

This will be the easiest option for you as you will not have to trace the old owners. Just make sure that you clearly  mention the details of the intermediate sale deeds, i.e. A to B, B to C, C to D, and D to you in the Rectification Deed. Also right that you are the successor-in-interest of B, C, and D and are executing this Rectification Deed directly with A as such.

You can send me a Private Message for additional help.

I fully agree with  the opinion of learned advocate Mr. Suneet Gupta on the subject query.   You may follow the suggested steps, take the help of a local lawyer if need be. 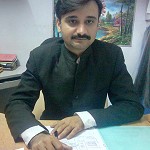 You are very well advised by learned advocates