498a no help from anywhere

I am living separate from my wife for past 2 years but in spite of this she has filed false 498a on me and my entire family members and i want to fight and teach her a lesson so in future no women dare to do such act.

Now here are the issues which i am facing and i think this is same which others who are victims of this law going through.

As soon i feared the FIR going to be filed i started looking for a good lawyer(in Delhi) and i found many who start their fees somewhere between INR 3000-7000 and assure that we will fight and no way pay any money and everyone knows these are false case and in all possible way we win.Now after FIR gets registered we have to pay bail and now the lawyer increase his fees and after bail and running around court now the lawyer talks about compromise and now the same person says its waste of time fighting as it will go on for years so better pay the compromise which is somewhere between 20-40lacs.When i tell the lawyer its a huge amount he says but paying it one time one gets the peace of mind otherwise paying the lawyers fees and running around for 10 years and finally one has to pay compensation to the girl so at the end its going to be more.Now its the same laywe who initially talked about fighting the case and not paying a single penny talking about compromise.

Now i want to change this lawyer but unfortunately i cannot and also its hard to find someone who really help one fighting 498a so i searched internet and found SaveIndianfamily.I contacted members from SIF for help and advice for a lawyer but at the end everyone only said one thinng better pay settlement and its waste of time fighting 498a and instead they wanted me to join their organization as a member.

I am here writing my first post being a victim of 498a to please let me know one genuine lawyer in Delhi who can fight 498a and really teach the girl and her family a lesson.I am ready to spend on lawyer if they genuinly do their work without making fool of their clients.

I agree with expert in this issue

yes mr raj is right.dont budge to the tactics played in the name of compromise.just fight the case on merits.if the accusations against you are false you will definitely win.based on the false  498a charge you can get divorce

If the allegations are false then you dont need to compromise, let it take ten years ,

but once you are proven in court, you will get divorce and she will not be able to claim maintanance also,infact you can claim damages from her because of all her deeds you lost your valuble life of 10 years.

so no point in compromise,if there is no guarentee that with this 20 lacs you will be out.

Thanks for all your reply but please tell me how can i fight when i don't find a single genuine lawyer who is ready to fight and not talk about compromise.

We know all the charges are false and its complete template from 498a and even the police also said the same.

If anyone know any good lawyer in Delhi please let me know.Please support to fight against this legal terrorism.

I am in a similar situation. If you find any genuine lawyer in Delhi, please post it here. WIll highly appreciate

Save India family Foundation is a paid organization.

The descripttion you have shared does not sound like SIF. Save Indian Family does not suggest settelement by paying money at all.

Please call SIF One to reach to right team and not similar sounding Business craving groups. 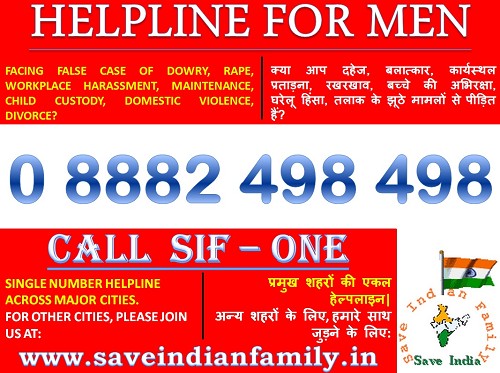 I contacted the number given on the website of saveindianfamily and from there what i realised is they wanted me to join them and at the end there is a meetup in which someone discuss what exactly 498a is (this everyone knows) and sit in some parks and share each other stories.

Neither SIF got any lawyers nor they can suggest any lawyers as at the end what kind of help they provide other  than adding one more member ?

There is no need to repeat post many times.

It seems you are not really aware about the Indian legal system.From lawyers to Judges the entire legal system act as a gang and even lawyers from other cours are not allowed to fight cases in the teritory of other lawyers in such situation if a common man decides to be his own lawyer then the Judge who himself is member of this gang will screw that person.

So your advice is like asking one to dig his own grave.

if u join SIF its for your own benefit. You will get a lot of confidence when u listen to people who were in your situation and came out victorios.

Experienced people will guide you and also u will be able to guess tht the advise which your lawyer is giving is genuine or not by discussing the same with SIF members who sit at Park.

SIF is asking you to join to make the movement big...u are trying to fight as a single soldier against the wast army of feminist.....have u thought we have Women commision in India....have u thought why not Men commission....because we are less voices to ask for it.

Many SIF members are so trained that they are almost equivalent in knowledge to some lawyers in matrimonial cases.

Join SIF...there's nothing to loose if u go there and sit. after 6 months if u attend SIF....u will be a well trained soldier and will be able to guide others to get the correct path..like the one u are seeking here in this forum.