Laws Of Succession Relating To Hindus

Gender Equality is one of the basic principles of the Indian Constitution and in order to remove inequalities between men and women with respect to the rights in property the Hindu Succession Act lays down the rules and a common list of heirs entitled to succeed the property.

Hence there was a need to form a uniform set of law for inheritance which may be acceptable to all the sections of Hindus and which can be equally enforceable on them. In this article we shall discuss about the laws governing inheritance of different Hindu family members. 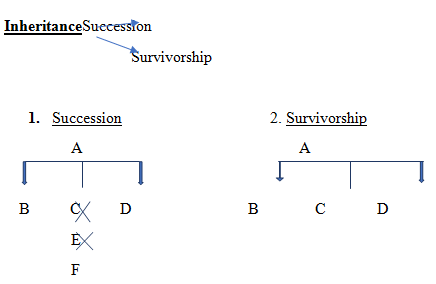 The Law of Succession is classified as under :

The main distinction between the terms ‘Succession’ and ‘Inheritance’ is :

3. Widow
a. Not more than one
b. Should be valid marriage

4. Mother
a. Adoptive
b. Natural

A person is said to be an agnate when he is related to the deceased wholly through male link or relation by blood / by adoption. Example - Son’s Son’s Son, Father’s Brother’s son, Brother’s Son’s son.

A person is said to be a cognate when he or she is related wholly through the female link either by blood / by adoption. Example - Daughter’s Son, Son’s Daughter’s Son.

The term ‘property’ in this section not only includes separate or self acquired property but also his interest in coparcenary property after partition. 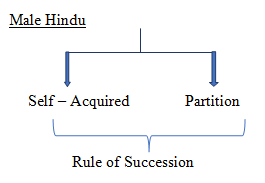 If a widow of a coparcener adopted a son after the partition, the adopted son becomes entitled to re-open the partition to claim his share in the property. He gets all the rights like that of a naturally born son.

At the time of partition, if a son is in the womb and no share is reserved for him he can get the partition reopened.

3. Son conceived and Born after Partition

Where a father does not take share at the time of partition and a son is begotten and born to him, the son van reopen the partition.

According to Mitakshara System they have a right while partition. But they do not have any right in partition according to dayabhag system.

In case of death of the mother her property would be inherited by her son not the step son.

8. Son of a Pre-deceased Son

The son of a pre-deceased son inherits simultaneously like other heirs mentioned in class I.

9. Son of a Pre-deceased Daughter

The son of a pre-deceased daughter inherits the property of the male Hindu who dies intestate. Daughter’s Son will include an adopted son

A minor coparcener can claim inheritance in joint family property. There is no bar to claim partition.

Section 15 of the Act lays down the ‘General rules of Succession’ in cases of a female dying intestate and Section 16 provides for the ‘Order of Succession’ and manner of distribution among heirs of a Female Hindu.

Before the passing of the Hindu Succession Act, 1956 the property of a woman was recognized into 2 heads : 1. Stridhan and 2. Women’s property

But now every property in her rightful and valid possession is called as stridhan and which is governed by the rules provided under Sections 15 and 16.

According to section 15 the property of a female Hindu dying intestate shall devolve according to the rule set out under section 16, which are as follows:

These are the list of Class I heirs (female) under the Hindu Succession Act, 2005 who can or cannot inherit the property when a Hindu Male dies intestate.

Published in Others
Views : 412