Wil sumbody teach me how to draw a sapinda diagrams????

Dreaw a family tree of Paternal side and find the routes of pinda.

In layman’s way try to understand sapinda relationship by “frog's leap” process !. Just as a frog leaps from one spot to another leaving intervening objects untouched, so in the below illustrations you will find under the notes there is sapindya in some relations and some are left unaffected by sapindya (as relationship is traced through the mothers and or fathers side of both). The maxim of 'frog's leap' is a very ancient one, being exemplified by the Mahabhasya of Patanjali.


From your Institution Library you may borrow one of the best books on this and allied subject titled; HISTORY OF DHARMASASTRA (ANCIENT AND MEDIEVAL RELIGIOUS AND CIVIL LAW) BY PANDURANG VAMAN KANE, M. A., LL. M. Pub.:  Bhandarkar Oriental Research Institute, Poona, 1941.

Hope for the time being this reply helps !

THANKS FOR MAKING IT VERY CLEAR

Is it possible to marry under following condition? 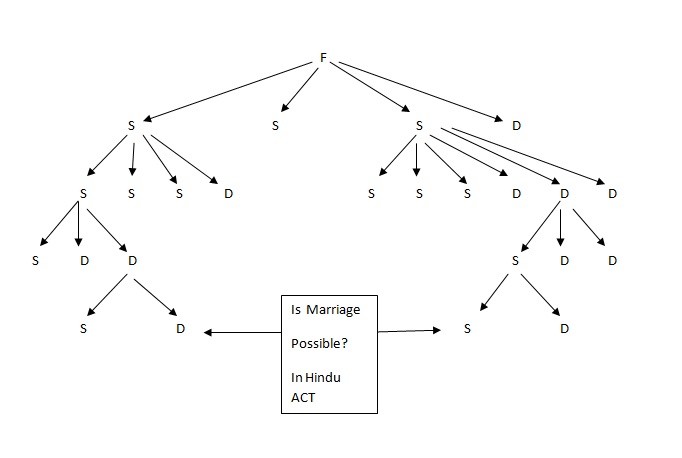 should not at all be common

in this case the goptram of paternal grandfather and of maternal gammother are same.