What  if someone doesn't believe in GOD or the existence of God is a matter of dispute or God is proved not to exist?

1.Earthquakes, Floods,volcanoes and other natural disasters were not acts of God.2. How did this term originate?

Please add   "N" numbers of Shocking and Unbelivable judgments to the list"... 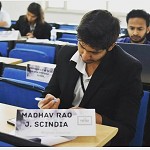 The interview of Ashok Singhal by a news channel dragged all my attentions to a very important liability. With all the charm this liability is called “Act of God.” Ashok Singhal in his interview declared the Godhra riot to be an “Act of God.” Well, now the query which pops up is whether God will be punished for this offence or not.

To answer this, first of all we should know what Act of God is. Act of God is an act of God. We associate all the natural beings with god, i.e., God is nature and nature is god. In simple words, whatever are the acts of nature is the act of God. Since, human beings are also a part of nature, it may appear that human activities are the acts of the nature, i.e., by further deduction, the act of God! But, the activities under the human control have been kept outside the definition of Act of God. Hence, miracles and disasters are act of God. But, the legal definition of this phenomenon includes mainly and, only the negatives of the term. Hence, mainly and only the disasters accomplish the criteria of act of god.

Act of God thus includes natural disasters like floods, earthquake, volcano eruption, tsunami, etc. The requisites for Act of God are:
(i) Acts without any kind of Human intervention
(ii) Acts beyond the human control
(iii) Acts which are unpredictable and inevitable

Now, modern technologies have grown so much that every other disaster can be predicted and can be controlled too; at least to a certain extent. And, also the natural calamities which we face in our day to day lives is a result of human actions. This means indirectly, the act of God is the act of Human Beings and also; God resides in every human being; may be, then the act of every human being is an Act of God. Confused!

Another deduction is that since, God punishes every human being for their wrongful acts (courtesy: religious texts); therefore the acts of God should also be punished on the grounds of equity. But sadly, acts of God are not punishable under law (FOR THE Fans of OMG!) Justice denied!

Act of god is an event or happening beyond human control. In case of such an occurrence no one can be held responsible or accountable for its causation.

Act of god directly signifies the impossibility or impracticality. The parties are no more obliged to carry out their ends of the contract.

In Nichols vs. Marshland, A heavy rainfall occurred such as never witnessed in human history and made the water flow out of artificial lakes at the defendant’s place, ruining four bridges of the Plaintiff. The court here ruled in favour of the defendant stating that the rainfall was an act of god.

example: earthquake, tsunami or any such natural disaster.

However the term reasonable care is important as there might be situations wherein a certain disaster hindered the performance of a contract but such disaster could be averted by exercising reasonable care.

A judge ruled the flooding in New Orleans caused by Hurricane Katrina (an act of God) as an act of negligence, citing the US Army Corps did not properly maintain flood defenses.

The phrase 'act of God' occurs in religious texts dating back to the 13th century, specifically referring to acts that God has undertaken. The 'act of God' referred to here is that which is used in legal and insurance circles when discussing any act which is outside human control and therefore not the responsibility of any individual or corporation. The term was first used in this way in the mid-19th century. Peter Simmonds' Dictionary of Trade Products, 1858, uses the term:

"Force-majeure, a French commercial term for unavoidable accidents in the transport of goods, from superior force, the act of God, etc.”