What Irrfan Khan and Rishi Kapoor left behind for the lawyers and people to learn?


If the coronavirus pandemic wasn't enough for the people to suffer, April had worse things in store for the people. On the 29th and 30th of April, India witnessed the passing away of two of its favourite actors, Irrfan Khan and Rishi Kapoor respectively. Even though both of the actors came from a different generation and different backgrounds, we can't help but agree that both of them were opposite sides of the same coin and ended up teaching us quite similar lessons in life and career.

One of the most loved and admired actors for the young generation, Sahabzade Irfan Ali Khan born on 7th of January 1967 has had his own share of struggles. Even though he was born in a wealthy family Khan dropped the "Sahabzada" from his name as it pointed to his family's privileged past and he wanted to make his career on his own terms through hard work. Having no connection in the film industry, he started his career as a television actor khan but failed to make an impression and would then try his luck on the big screen. Khan was then offered a role in Meera Nair's 'Salaam Bombay', but his role was removed from the same at the last moment. His morale was shattered but he didn't stop dreaming and kept working hard which lead to him act in critically acclaimed films in UK and USA and then bagging key roles in Bollywood films too. After this there was no stopping Irrfan as he went on to star in Oscar winning films Slumdog Millionaire and Life of Pie. He became the face of Bollywood in the west bagging roles in high budget successful films. One interesting thing to note is when the original Jurassic Park opened in 1993, Irrfan could not even afford to buy a ticket to see the film, and 22 years later he had the main role in the latest Jurassic Park film.

Rishi Kapoor has always silenced critics who talk about nepotism in the film industry. Kapoor has always said that coming from an established film family helped him bag a role in his first movie, but after that it was all him. 'My surname didn't make me an overnight star' said Kapoor who also had his fair share of struggles and it was films like 'Mera Naam Joker' and 'Bobby' that made him the successful actor he is. Every year a product of nepotism enters the Hindi film industry but only few stay, because the audience respects work and if one doesn't work hard there is no way he/she can survive in the fast-growing industry because of the competition that is there.  Kapoor was admired by the whole country who gave him the title of the 'chocolate boy' because of the charm he displayed in the romantic roles. 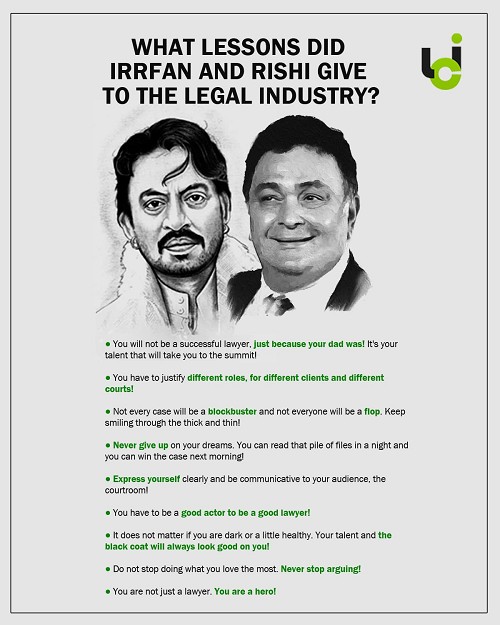 What can lawyers and people learn from these two brilliant actors?

Even though one came from a film background and one did not, both struggled in the industry and it was their hard work that established their names in the industry.

As Irrfan Khan said 'The sign of a good society is where talent is respected.' Upcoming lawyers may also find themselves in a position where they don't have any connections in the legal world or a legal background to support them but just their talent and will. They should learn from Irrfan and shouldn't stop dreaming and working hard because in the end it is their talent and dedication that will pay off. Same goes for the lawyers that have connections and roots in the legal world, but still wouldn't be able to survive in this field if they don't work hard.

Ups and downs are a part of everyone's life but one shouldn't quit but keep working hard like Irrfan Khan and Rishi Kapoor to achieve his dreams one day. A lawyer has one of  the most dynamic professions and has to to see himself/herself on a roller coaster each day. Sometimes up and enjoying and sometimes just back to wondering if LLB was the right choice. You gotta know that choices are not good because they are titled as 'good' choices by the world, but because you make that choice, give it your sweat and blood, your sincerity and hard work and make it work.

Failures and Pain are inevitable, and it is how one deals with them that decides where they end up in their life. It's not that Rishi did not have to make his way through the industry without facing any failure. His career took a huge hickup near the 80s but he once again rose to be one of the most loved and admired actors of all time. Lawyers, or just any professional, have to go through life and just do their best and keep the perseverance in one and sincerity in another hand.

Irrfan Khan and Rishi Kapoor always took up unconventional roles, from a businessman to a ragpicker, from a little boy wanting to learn some life lessons to a gangster bent on doing all the evil stuff that one can imagine, and were never afraid to take risks. Similarly, a lawyer has to be not just a lawyer but a brother, a sister, a father, a friend, an enemy, and what not, for his clients. A lawyer has to appear in different courts with different judges with different attitudes and play their role in entirely different temperaments according to their case. They have to take risks and play the jugglery in the courtroom more than never and try to work things for the client. People not only in the legal field but also in other professions shouldn't stop taking risks.

How Rishi Kapoor and Irrfan never backed away from expressing their views and speak against injustice on social media, and various other platforms, lawyers should also express themselves truly and firmly and make sure that they realize that lawyering is not just a personal profession. It is a public profession and affects not only one lawyer and his client but the society as a whole. In addition to that, their expressions have to be clear and communicative enough for anyone to understand, which would help them not just in courts but also at the negotiation table and while drafting contracts.

Even though Irrfan and Rishi were suffering, both never stopped smiling, faced all obstacles and did what they loved the most i.e., act and entertain the people. A lawyer also shouldn't give up just because of some failures, especially in the nascent years of practice, when everyday feels like suffering. He/ She should rather welcome the failures with a smiling face and move ahead in life as there will be better days. There will be days when they get a chance and they actually do change the face of the society and get respected and acknowledged for it.

My utter respect and gratitude to both the divine personalities for showing India and the world that absolutely nothing is unimaginable and nothing is hard if worked just enough for with genuinity and integrity. My gratitude to them for making this world a happier and a more thoughtful one and for making everyone realize that they can dream!

Category Others, Other Articles by - Archit Uniyal