The Criminology Of The Future: How Science Helps In Crime Investigation


“What you lack in any investigation is time. With every passing hour, evidence slips away. Crime scenes are compromised by people and the elements. Things are moved, altered, smeared, shifted. Organisms rot. Wind blows dust and contaminants. Memories change and fade. As you move away from the event, you move away from the solution.” - Maureen Johnson
The above quote is extracted from a book “truly devious” by Maureen Johnson and perhaps gives an idea of why technical advancement in the field of criminal investigation is a necessity. Not only can it help in solving a criminal case accurately and fast, but can also help in a situation where a case due to lack of evidences could not be solved for a long period of time. The only requirement is a promising clue.
In this article we shall be dealing with how scientific advancement can help both criminology and criminal justice system for the purpose of addressing investigative questions. This is commonly known as “forensic criminology”.

Imagine a crime scene. A dead body lying, things scattered, blood on the floor. A person is accused for the crime. He denies the same. Now, at this point, several questions arise. What can be the reason for the person accused to kill the victim, how did he murder him, is there any evidence that signifies that the accused has indeed committed the crime, what was his mental state and the circumstances. This is the stage where criminology comes to play its part in identifying the circumstances and reasons behind the crime. On the other hand, science helps in establishing a link between the circumstances and the evidences providing accurate, reliable and unbiased information. Therefore, criminology and forensics go hand in hand in criminal investigation.
It is a fact that society is going through major technological changes, and with these changes the perpetrators have also evolved their techniques while adopting better ways to conceal their identity. Along with that, in the present time every person has access to smart phones and internet connection which adds up to better knowledge of science and technology in an average human being. Internet is an easy source to research different methods to commit a crime without getting caught. Use of dark web for criminal activities is even more disturbing as it leaves no trace of information.

The technical advancement has made crime available at the tip of the finger. However, the same fingertips can help in investigating the crime too. Forensic Science is a tool which is constituted of various concepts such as biology, sociology, criminal psychology, DNA profiling, physics, chemistry, fluid analysis, handwriting analysis, computer science etc. providing for an advanced method for better criminal investigation and justice dispensation. 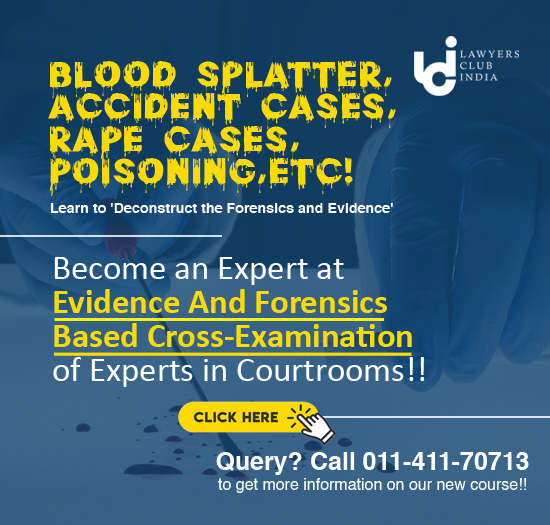 Principle of individuality- As per this principle, every object, either natural or artificial has its individual identity which is different from others and cannot be duplicated. Two very important examples of this principle are DNA and fingerprint. Fingerprints have been used as evidence in various criminal cases. In the case of State v. Karugope (A.I.R. 1954 Pat. 131) the Patna High Court has stated that the opinion of the fingerprint expert is sufficient evidence for conviction.

Principle of exchange- Edmond Locard laid down this principle stating “contact exchanges traces”. It simply implies that whenever a crime has been committed, the criminal either leaves his traces or picks them up.

The cases where a weapon is used, it leaves its mark on the body of the victim. In case where there is a tussle between the two parties, the criminal might leave traces of his DNA on the fingernail of the victim or hair strands. Forensic science establishes a link between the evidences, victim and criminal.

Ballistic fingerprinting links the bullet casings with the gun through which they were fired. Sperm in a used condom helps find the rapist. Bite marks on the body can be used to match the suspect’s teeth. The nature of wound can tell what kind of weapon was used in cases where the weapon was not available. Blood, footprints, drugs and basically any material substance that is available at crime scene tells a story. Probably not only the dead, but everything in a criminal investigation speaks.

Principle of progressive change- As evident from its name, this principle implies that everything with the passage of time changes. The offender as well as the evidences, time has its impact on everything. Everything that can be evidence should be handled very carefully. For example- blood samples, semen, hair strands, fingerprints, these traces must be carefully collected and examined as soon as possible so that they do not lose their property and an accurate report can be generated. The quality of the sample must be maintained.

Apart from these three principles, there some other general principles of forensic sciences too such as law of analysis, comparison and probability which states that a correct sample must be collected and analysed, sample should be compared with other like samples, and, that al occurrences, whether they definite or indefinite are probable in nature respectively.

The advancements that are being made in the forensic methodology are capable of doing wonders in the future. While the present day forensic analysis is not flawless, the future might offer better technique. DNA analysis is going to make some major developments in criminal justice system. Let’s have a look different forensic tools that are going to offer much in the future-

From the above discussion, it can be construed that DNA is going to be future of forensic sciences in criminal investigation. DNA is contained in several components of the body. It can be extracted from samples of nails, hair, saliva, semen, skin tissue, blood etc.

Further, DNA sample comes to aid in cases where there are multiple suspects. Apart from DNA, computer and artificial intelligence in future might be telling everything about a suspicious place or person on the basis of location and other personal information without having any eye witness required. Maybe the advancement in artificial intelligence and other areas of forensics in future might be able to accurately tell as to who should be suspected and who should not.

Although these advancements will lay down a roadmap for criminal investigation, there are many challenges that will be still faced. The judges do not have such deep scientific knowledge and only experts can understand whether a procedure has been correctly followed or not. Such issues lead to a conservative approach that is adopted by the court. To take benefit of forensic science in criminal investigation, it is necessary for both investigating officers and judiciary should understand and appreciate it as a reliable tool for investigation, and it can work wonders in crime solving.

Category Others, Other Articles by - Pallavi Singh