NDPS Act also aims to check the problem of Drug addiction. Drug addiction is a disease in which a person loses the ability to control his or her use of drugs and uses them repeatedly, resulting in addiction, which then affects that person's brain and behavior.

The need for regulating Narcotic Drugs and Psychotropic Substances is an open book; we regularly hear of cases where drugs have not only ruined a person's life, but also the lives of others.

ENACTMENT OF THE NDPS ACT

The Bill was signed into law by then-President Giani Zail Singh and came to be known as the Narcotic Drugs and Psychotropic Substances Act of 1985. Entry 19 of List III (Concurrent List) of Schedule VII of the Constitution of India gives the States and the Central Government, the authority to legislate on matters relating to "drugs and poisons," but this authority is subject to Entry 59 of List I (Union List) of Schedule VII of the Indian Constitution, which prohibits "the cultivation, manufacture, and sale for export of opium."

IMPORTANT PROVISIONS OF THE NDPS ACT

This Section lists the short title, scope, and commencement date of the NDPS Act. This Act applies to the whole of India, and its scope includes Citizens of India, as well as all persons on ships and aircrafts registered in India.

Section 3 - Power to add to or omit from the list of psychotropic substances.

The Central Government has reserved its power under Section 3 of the NDPS Act to add or delete such substance or natural material or salt or preparation of such substance or material from the list of Psychotropic Substances as and when the government deems it necessary or expedient to do so in a very simple way simply through a notification in the official gazette without any Bill or amendments to be passed based on available information or a decision.

Section 4 - Central Government to take measures for preventing and combating abuse of and illicit traffic in narcotic drugs, etc.

This Section states that no one shall produce, manufacture, possess, sell, purchase, transport, warehouse, use, consume, import inter-State, export inter-State, import into India, export from India or transship any narcotic drug or psychotropic substance, except for medical or scientific purposes and in the manner and extent provided by the provisions of this Act.

Section 21 - Punishment for contravention of manufactured drugs and preparations.

Punishment for a violation regarding manufactured pharmaceuticals and preparations is specified in Section 21 of the NDPS Act as follows:

(b) For less than commercial quantity but greater than small quantity - rigorous imprisonment up to 10 years, and fine up to Rs. 1 Lakh;

(c) For Commercial quantity - rigorous imprisonment from 10 to 20 years, and fine from Rs. 1 Lakh up to 2 Lakhs (Court may impose a fine exceeding two lakh rupees after recording the reasons in its judgment);

Section 25 - Punishment for allowing premises, etc., to be used for the commission of an offense.

This Section provides punishment for intentionally enabling premises, etc., to be used to commit an infraction. Whoever owns or occupies, or has control or use of, any house, room, enclosure, space, place, animal, or conveyance and knowingly allows it to be used for the commission of an offence punishable under any provision of this Act by another person, shall be punished with the punishment provided for that offence.

According to Section 35 of the NDPS Act, the court shall presume the presence of the accused's culpable mental state, but it shall be a defense for the accused to establish that he did not have a guilty mental state.

This Section in a 'non-obstinate provision states that any offense under this Act punishable by imprisonment of more than three years shall be triable exclusively by the Special Court, to ensure a rapid trial.

SECTION 50 - Conditions under which search of persons shall be conducted.

The NDPS Act specifies certain conditions to be fulfilled while searchingfor a person. A failure to follow such conditions represents a violation of the urgent requirement of law, that may result in the accused's acquittal. According to Section 50 of the NDPS Act, the authorized officer who is acting on prior information to search a person shall have to take the person (whose search is to be conducted) to the nearest Gazetted Officer if the person (whose search is to be conducted) demands to be searched by a Gazetted Officer.

This section provides that an authorized officer can call for information from any person if such officer thinks that there has been a contravention of the NDPS Act. No confession can be recorded under Section 67 as no such power has been explicitly or implicitly granted to the empowered official under Section 67. 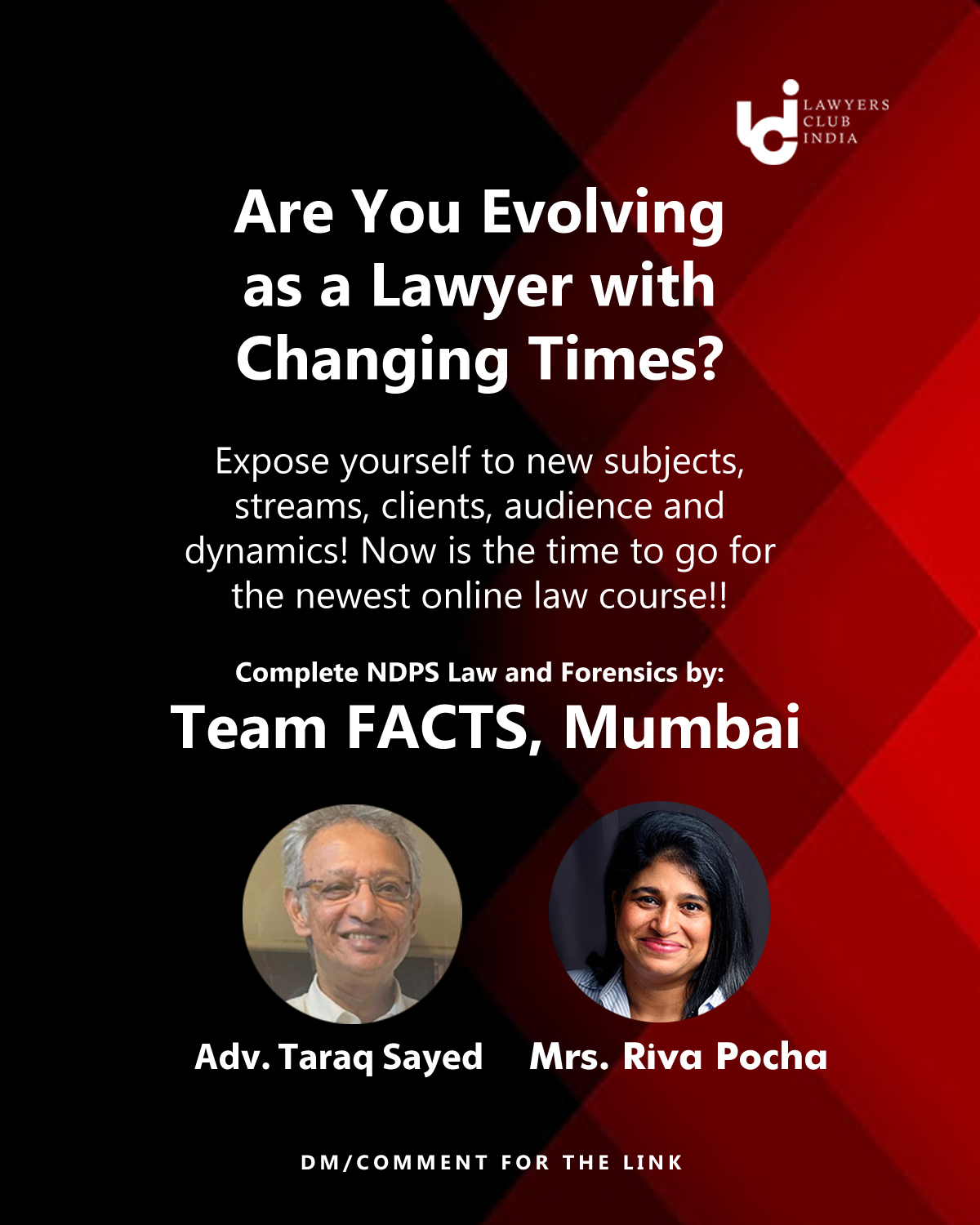 In this case, the Hon’ble Supreme Court held that owing to Section 37 of the NDPS Act, all the offenses committed under the Act were cognizable and non-bailable. The Court also laid down the stringent conditions forgranting bail to the persons accused under NDPS Act.

In this case, the Hon’ble Supreme Court observed that the officers who are endowed with powers under theSection 53 of the NDPS Act are “police officers” which is within the meaning of Section 25 of the Evidence Act.Therefore, any confession made to such officers would be barred under the Evidence Act.

In this case, the Apex Court had held that the exercise of power to grant bail would not only be subjected to the limitations contained under Section 439 of the CrPC, but also to the limitations under Section 37, NDPS Act. Section 37 of the NDPS Act provides that no person could be enlarged on bail under the Act unless the prosecution had been allowed to oppose the application, and the Court had been satisfied that there were reasonable grounds for the accused’s innocence.

The Hon’ble Supreme Court in this case observed that the mere passage of time during the pendency of the appeal could not be a ground for suspending the sentence and granting bail in NDPS Cases.

In this case, the Hon’ble Supreme Court held that the bail could be granted where there was a reasonable possibility of the acquittal of the accused.

In this case, the Hon’ble Bombay High Court held that it would defeat the object of the NDPS Act if the accused claimed bail as a matter of right due to possession in small quantity.

In this case, the Hon’ble Supreme Court observed that the persons dealing in narcotic drugs play an instrumental role in causing the deaths of the young, innocent people who are most vulnerable to drug addiction. Therefore, while awarding the sentence or punishment to the accused in the case of the NDPS Act, the poverty of the accused or the consideration that he was the sole earner in his family could not lighten his punishment/sentence. But, the quantity of narcotic substance recovered would be a relevant factor for imposing punishment higher than 10 years under Section 32B of the NDPS Act.

The Hon’ble Supreme Court in this case observed that a private vehicle would not fall within the expression "public place" used in Section 43 of the NDPS Act. In this case, the drugs were recovered from the accused while they were in a jeep at a public place.

In this case, the Hon’ble Supreme Court observed that the bail to an accused under the NDPS Act could be granted only if there were reasonable grounds to believe that the accused was innocent and that he was unlikely to commit any offense while being released on bail.

The object behind enacting NDPS Act was to control and regulate the transportation and consumption of illicit substances. The Act has been implemented and is still achieving its Aim. The Union, State, and the Local Government have been successful in introducing the rules of the Act to bring about a positive change in the society. To conclude consumption of narcotic drugs and similar substances for intoxication and entertainment purposes, shall have a dangerous impact on the user and be evil to society. Therefore, let good sense prevail and drug abuse stops.

Category Others, Other Articles by - khushi doshi