The basic function of Parliament is to make laws, amend them or repeal them.Legislative Procedure refers to the procedure which is followed for making laws. It is initiated by the introduction of proposal for the legislation in the form of a bill and involves the following stages broadly:

This article discusses the legislative process in respect to the following bills: 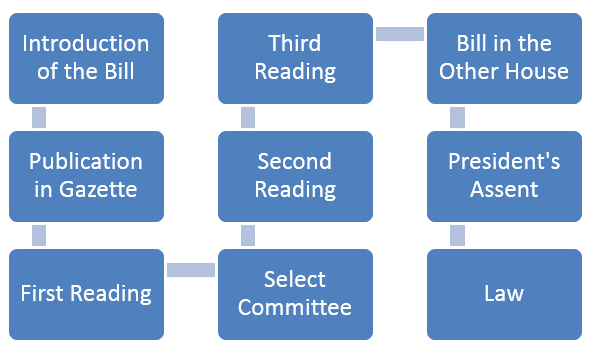 Ordinary bills are concerned with any matter other than Financial Bills, money Bills or bill involving expenditure from Consolidated Fund of India.

An ordinary bill may be introduced in either houses of Parliament, when passes by the house in which it is introduced, the bill is to be transmitted to the other house. When the other house also agrees to the bill, it is said to have been passed by both the houses, It is then sent to the President for assent.

A bill is carried forward through all the stages of the legislative process “by a long chain of standardized motions” which must be adopted by the House before the bill becomes law.  It is these motions, and not the bill, that are the subject of the decisions and debates of the House. These stages “constitute a simple and logical process in which each stage transcends the one immediately before it, so that although the basic motions — that the bill be read a first (second or third) time — ostensibly are the same, and seem repetitious, they have very different meanings”. The passing of the bill is done in three stages commonly known as readings:

First Reading- the bill is just introduced. No discussion takes place at this stage.

Second Reading- Consideration stage begins where the bill is discussed clause by clause. At this stage amendments are moved, or accepted or rejected.

Third Reading- A brief general discussion takes place and the bill is passed.

All the three readings takes place in both the houses.

The expression ‘Money Bill’ is defined by clause (1) of Article 110. It is that bill which contains only provisions dealing with all or any of the following matters, namely-

However, a bill shall not to be deemed a Money Bill by reasons only that it provides for the imposition of the fines or pecuniary penalties or for demand or payment of fees or it has anything to do with tax.

If any question arises as to whether a Bill is a money bill or not, the decision of the Speaker of LokSabha shall be final.

It is thus clear that RajyaSabha has no power with respect to the passing of a Money Bill except delaying its passing for a period of 14 days.

This Bill encompasses all amendments required in various laws pertaining to tax, in accordance with the tax proposals made in the Union Budget. The Finance Bill, as a Money Bill, needs to be passed by the LokSabha — the lower house of the Parliament. Post the LokSabha’s approval, the Finance Bill becomes Finance Act.

Difference between a Money Bill and the Finance Bill

A Bill which, if enacted and brought into operation, would involve expenditure from the consolidated Fund of India shall not be passed by either House of Parliament unless the President has recommended to that House the consideration of the Bill.

DEADLOCK IN THE HOUSES OF PARLIAMENT ON A BILL (Article 108)

Joint sitting of both Houses in certain cases where the bill is not a Money Bill.

Category Others, Other Articles by - Anukriti