The world has been battling an alluvion of misinformation and influence on operations for a long time now. With the advent of internet and social media platforms has given a free run to criminals, miscreants, nation states and other motivated actors. In fact, society, today is experiencing something called an 'information disorder' where it has become extremely difficult to disambiguate truth from falsehood, usually the above is done by 'spicing up the news' in order to get more views, in order to get more publicity of news channels.

Not only the above but theexpansion of technology, cheap smartphones, and reasonable data rates has enabled the democratization of online content making traditional journalistic controls of verification unfeasible. Thus, the unconfined flow of speech has become vulnerable to the peddling of unverified information as well as giving unlimited freedom to misuse the real news.

'Fake news' or misinformation is something which isn't the only of our country but has become a global concern since the rise of unpleasant incidents that have challenged the users' trust in the news.The root cause of this issue is lack of policy implementation or laws which could either curb fake news or hold such perpetrators accountable for their action, making the situation complex and challenging. Responsible and informed citizens have time and again raised the issue to review and amend the existing laws and regulations to meet the challenges of spreading of the fake newsbut efforts by both policymakers and civil societies have not been enough to address this huge lacuna within the overwhelming news sharing space available in this era. Media is now a web of propagandaand everything is about more views than news.

India, being a massive market for WhatsApp application, has more than 200 million active users and this number has only been increasing, making it as one of the easiest and fastest-growing platforms. Even though we have been familiar with the term 'fake news' since a century at least but it attained a renewed interest among media scholars and journalists in recent times, only because of the sudden rise of hoaxes propagated.

A few years ago, 'fake news' was a rarely used terminology but today, it has become one of the capital threats to the existing system of democracy and one of the hot topics for the debaters. Fake news hasn't been defined anywhere though it can be defined as 'untrue and unverified news.' 'Untrue' means false facts, whereas 'unverified' means where the facts might be true, but the numbers and characters are false. The factor that makes fake news a concern is that it allows subjective interpretations of the concept, thus making it difficult to study or allow any policy interventions. Fake news may comprise of stories, news, and hoaxes created to misinform deliberately or deceive readers or to push a political agenda. In contemporary times, various media propagate fake news.

On February 15,2020 the director-general of the World Health Organization, addressing the Munich Security Conference, asserted that 'we're not just fighting an epidemic; we're fighting an infodemic'

'Fake news spreads faster and more easily than this virus(covid-19) and is just as dangerous,' he said. He advocated that science and evidence must lead policy.

There is no secret in the fact that news aired by news channels and same available over online media platforms performs a great deal in shaping opinions of people across the world but if we talk about its consequences, they are even worse in a country like India.According to a report by Indo-Asian News Service (2018), a very significant portion of such news/ messages revolves around the basic idea of nationalism and nation-building. In scenarios like these, where the main idea behind spreading news is related to nationalism, the facts become less important for the users than the emotional desire to bolster their national identity.

Thus, it is very clear acts of spicing up or twisting up the facts is done to play with the emotions of the users in order to get as much as publicity as possible and real facts hold very little importance in today's date. Such acts of going over board and presenting vague/bogus news are examples of degraded quality of journalism in today's date.

Unlike other countries, the prime distributor of fake news in India is WhatsApp, but not other social networking sites like Facebook or Twitter.This social media platform allows its users to share information by forwarding it to other users in various groups and broadcast lists within the same platform which has led to widespread, unchecked distribution of information rarely vetted by users. The result of the same is so significant that it could be named serious 'social challenge',it has not only misinformed the users on social media but also triggered violence and barbaric killings around the country resulting in a poisonous atmosphere and then airing the same over news channels debarring the public from actual concerns of the country and shifting the entire focus somewhere else.

The influence is so huge that at times even scholars and ministers have been seen posting or commenting public about a fake news without knowing its authenticity.

No provision in Indian law specifically deals with 'fake news' or misinformation. However, the following offenses under different acts criminalize certain forms of speech that may constitute 'fake news' and apply to online or social media content:

SECTION 66D: Whoever, by means for any communication device or computer resource cheats by personating. Imprisonment of either description for a term which may extend to three years and shall also be liable to fine which may extend to one lakh rupees.

Offenses, listed in Chapter XI of the Act, specify punishments for publishing obscene[1] and sexually explicit material.[2] As noted above, the IT Act had a section 66Athat could have been applicable to instances of fake news, but has since been struck down by the Supreme Court on the ground that did not fall within any of the reasonable exceptions to the exercise of the constitutional right to freedom of expression. As described by the Court, the provision had prohibited 'the dissemination of information by means of a computer resource or a communication device intended to cause annoyance, inconvenience or insult.'[3]

SECTION 79 of the IT Act grants limited immunity to intermediaries for any illegal content posted by third parties. In 2018, a calling attention motion on the misuse of social media platforms and the spreading of fake news was admitted in the Rajya Sabha, the upper house of India's National Parliament. The Minister of Electronics and Information Technology responded to the motion on July 26, 2018, and 'made a detailed statement where he inter alia conveyed to the House the resolve of the Government to strengthen the legal framework and make the social media platforms accountable under the law.'[4] Subsequently, the Ministry prepared the draft Information Technology (Intermediary Guidelines (Amendment) Rules 2018 which would amend the rules notified in 2011. Under the draft rules' intermediaries would be required to proactively monitor and filter unlawful content[5] and provide for the TRACEABILITY OF USERS.[6]

SECTION 54 OF THE DISASTER MANAGEMENT ACT, 2005: Whoever makes or circulates a false alarm or warning as to disaster or its severity or magnitude, leading to panic.

Punishment: Imprisonment which may extend to one year or with fine.

IS REGULATING NEWS BEFORE ALLOWING THEM TO AIR IS VIOLATIVE OF ARTICLE 19 OF OUR CONSTITUTION?

The answer is no, though Freedom of expression as mentioned in the preamble of our Constitution and the right is protected under article 19, which states that '[a]ll citizens shall have the right . . . to freedom of speech and expression.'[7] This right is not absolute and is subject to 'reasonable restrictions' 'in the interests of the sovereignty and integrity of India, the security of the State, friendly relations with foreign States, public order, decency or morality, or in relation to contempt of court, defamation or incitement to an offence.'

In the 2015 case of Shreya Singhal v. Union of India,[8] which tested the scope of the 'reasonable restrictions' standard, the Supreme Court of India struck down section 66A of the Information Technology Act, 2000, holding that 'the [section's] prohibition against the dissemination of information by means of a computer resource or a communication device intended to cause annoyance, inconvenience or insult did not fall within any reasonable exceptions to the exercise of the right to freedom of expression.''It is clear,' the Court said, 'that Section 66A arbitrarily, excessively and disproportionately invades the right of free speech and upsets the balance between such right and the reasonable restrictions that may be imposed on such right.' The Court also stated that the definition of offenses under the section were both 'open-ended and undefined' and that '[t]he information disseminated over the Internet need not be information which 'incites' anybody at all. Written words may be sent that may be purely in the realm of 'discussion' or 'advocacy' of a 'particular point of view.'' However, in other cases, the Supreme Court of India has upheld restrictions on free speech such as in the case of Subramanian Swamy v. Union of India,[9] which upheld the constitutionality of the criminal defamation sections of the Indian Penal Code.

If we talk about China it has been claimed worldwide that China has been manufacturing and disseminating fake news since a long time against many countries. With its latest clash with India at Galwan Valley, it left no stone unturned to destroy the images of India and project itself as righteous. The most glaring examples is, 美麗的男何金濤 (@CNPakWW): The Self-Proclaimed Harbinger of 'China-Pak Friendship'. @CNPakWW by the operator's own admission is a handle which stands for 'friendship' between China and Pakistan.

The misinformation shared by @CNPakWW can be broadly grouped into three main categories:

Whereas, if we talk about India, though India has not manufactured any lies about Galwan Valley Incident but in order to gain publicity news channels have here and now used various news statements to instigate Indians against China. Like:

Every day thousands of fake news gets viral about one thing or another, there have been 'n' number of examples of the same, like a news piece claiming keeping some herbals in your pocket would prevent coronavirus and so on.

BBC said, they've looked back at claims debunked by five Indian fact-checking websites between January and June this year.

They fall under four broad headings: 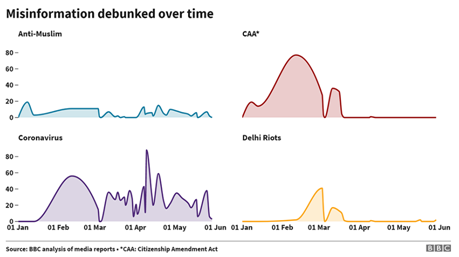 MEASURES TO BE TAKEN TO COUNTER FAKE NEWS

Fake News has become a menace which could only be curbed when collective efforts are made from individual to policy level.

[9]Association for Progressive Communications (APC), State of the Internet in Asia: The Case of India, Malaysia and Pakistan 21 (2017)

Category Others, Other Articles by - Namami Jain