Dealing with Hostile Persons on Negotiation Table by Pascal Comvalius 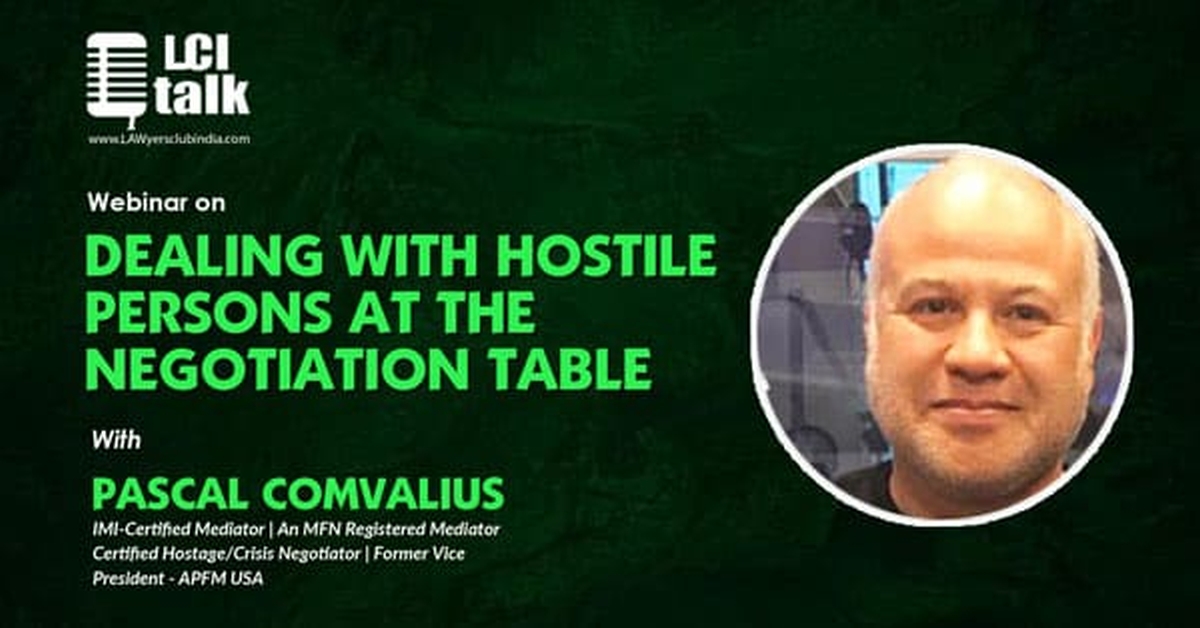 The members of LAWyersClubIndia had a great opportunity to participate and organize in a webinar session with Mr. PASCAL COMVALIUS, who is a renowned mediator having mediated over 300 cases since 2008 in various areas of dispute - commercial, matrimonial, workplace and even criminal. During the webinar, sir talked about different aspects that are related to 'Dealing with hostile persons on negotiation table'.Sir has always made it a point to share his knowledge through lecturing at Universities and coaching students for mediation and negotiation competitions by enhancing their skills.In the course of the webinar, he explained in minute details on how to handle a high conflict situation and hostile individuals during a negotiation, in a way to ensure that the balance of power is in our favour.

PascalComvalius is a certified mediator recognized by International Mediation Institute. He serves as the co-chair of the appraisal committee and is a member of the ISC Executive Committee in the IMI. He is an MFN registered mediator, certified crisis/hostage negotiator and a suicide prevention gatekeeper. He is the former vice president of the Academy of Professional Family Mediation in USA. The style of negotiation that he adopts is Client centered, wherein he guides the parties through the whole process, boosting the communication between them and enabling them to take decisions of their own. His competency in reading body languages has shaped him into a promising trade negotiator, which is why he chose to talk on aproximate topic that he conceives significant for any negotiator.

As an introductory opening to the discussion, Sir presented to the viewers the 'Nine-stage Model of Conflict Escalation' by Friedrich Glasl, which he believes as an effective academic theory in comprehending the pressures which act upon a person who is involved in a dispute. The first stage of conflict is tensions - where the parties find a difference in their needs and recognizes that there has been a standstill for a while, despite the efforts taken, which compels them to register only negative information about the other party. Verbal confrontations lead to debates and polemics, eventually turning into actions instead of words. The priority becomes defending of images and coalition, rather than concrete issues. The loss of face stage makes parties feel that they have suddenly seen through the mask of the other party, revealing his immoralities. To force the counterparty into accepting their needs, people resort to strategies of threats. Further, the parties believe it as a lose-lose situation and concern shifts to receiving limited (or lesser) destructive blows, followed by fragmentation of the enemy into ineffectual particles. In the end, it becomes a race together into the abyss, making sure the enemy falls too, at whatever cost.

WHY/WHEN DOES A CONFLICT HAPPEN?

Sir pointed out situations that could potentially lead to conflicts. When a party is being irrational and you fail to understand him/her, one of the possibility is to empathize - stand in his shoes and explain what it is all about. A perfectly rational party could also be taking irrational stands as part of his negotiation strategy. Alternatively, when a party is completely irrational, even your attempt to make a normal discourse could be turned down leading to ultimate conflict, because he will constantly try to put you down.

High Conflict people are observed to have some common characteristics, as explained by Mr. Pascal. They would be often pre-occupied with blaming other people - either other parties or the negotiator. Care must be taken to not get too involved in such situations.  Another observation is that such people will only see good and bad people, with no in between. They misconstrue and categorize everyone into parties on their side and parties on the opposite side. High Conflict people are often emotionally turbulent - be it anger, sadness or fear and they often display extremities of behavior.

HOW BIAS MANIFESTS ITSELF IN OUR MINDS?

To explain, Sir illustrated a situation - when a word 'SO_P' is presented, a party could relate it to food (soup) whereas the other party relates it to washroomnecessities (soap). This is referred to as priming effect - an implicit memory effect in which exposure on a stimulus influences the response to another stimulus, often leading to bias.

For a negotiator it is important to understand that a person could perceive a situation or concept placing himself in four different positions, namely -

Sometimes, mere words (direct - 'I am the boss here. I decide things' or indirect - 'It cannot happen') could trigger high conflict persons. Otherwise, situations like public humiliation or physical exhaustion could be the reason. However, Mr. Pascal pointed out that any emotional surge can only last for a short time, which is to remind us that if we wait for a while, the individual's anger or frustration could drop.

In case of negotiations, there could be an irrational escalation of commitments, where these high conflict people becomes interested so much in a particular offer but the dispute keeps going in a way they don't want and they get frustrated at themselves. It is possible that when they make a certain proposal, that particular number on the table gets stuck on their mind. When the other person differs from it, they could be triggered. Another situation is when high conflict people are under the misconception that every proposal made by the opposite party will be destructive for him. Here, Mr. Pascal said, it is important to fix their piece of trust in you.

Mr. Pascal added how cultural differences of parties have a cogent part to play while dealing with hostile situations. He explained how Americans are different, as described by Catherine Davidson in the beginning of the session. As a native of Netherlands, he shared how its people are generally very direct while others resort to nonverbal communications. The Mediterraneansgenerally elaborate on metaphors. He went on to share a personal experience he had with regard to cultural differences disrupting a process of commercial negotiation, involving frustrated parties belonging to India and Netherlands and explained how his right kind of interventionfacilitated effective communication on a later stage. Whenever such situations occur, it is detrimental to actwithout a plan, leading to escalating tension.

While answering a question whether cultural understanding negatively affects our ability to judge leading to stereotypes and biases, Mr. Pascal said that no pure neutrality exists and we should be able to work around the biases by being aware of the differences.

WHAT CAN WE DO ABOUT CONFLICT/HOSTILE SITUATIONS?

Mr. Pascal believes that it is always important to primarily understand what makes it difficult for us to talk to them and then analyze the situation by thinking why it is difficult for them. This need not necessarily be accepting their demands. Restrain yourself to merely connecting with them. Avoiding biases or assumptions and being aware of all available communication channels could be of great help. Another major factor is respect for other parties and their opinions. Keeping a balance of words rather than threatening is an effective way to deal with these situations. He also holds patience as a prime key to success during negotiations.

On the other hand, Mr. Pascal noted that when another party is attempting to provoke us emotionally, by challenging/demeaning/criticizing us, we should not take it personally and give it back at them since they were at fault. During a commercial negotiation, it is possible that the person is being hostile without an underlying objective and such actions are attempts to see how we react to it. Mr. Pascal asks to 'Breathe. Be firm and friendly' and ask for invitation to help you understand what is going on, instead of retreating all of a sudden. Another high alert situation is when the party is non-interactive, because it means the negotiator is missing out on information. Therefore, he thinks it is suitable to get them talking with a question like 'It puzzles me that you're very thoughtful. What's going on there?'

There are five key tools that Mr. Pascal considers extremely fundamental while negotiating in a high conflict situation or hostile individuals, which are as follows-

When there is an unexpected display of their emotions, there is no need to be afraid because it is good as it helps negotiators understand better. It is pertinent to calm them down when their emotions are obstructing the objectivity of the negotiation.To validate this reasoning, he demonstrated two situations from his own personal experiences. While he was in the middle of a negotiation between an American couple, he noticed that the man had a gun in his pocket. The typical and sudden response was for him to think that the man is probably going to shoot his ex-wife. He pointed out why it was important to stay away from biases because as soon as he overcame his fear-provoking presumption, he communicated to the man that he intends to ensure a safe environment for their discussion and hence the gun has to be kept away, to which the man agreed. In the middle of a criminal mediation, the offender lost control and continued screaming for more than 10 minutes. Use of physical force or talking did not help; whispering her name did. The not-so-overpowering voice of her familiar name being called out calmed her down sooner than employment of physical force. Mr. Pascal also stated that working as a team of people is more advisablesince one person alone might be forced to get along with another, who he dislikes or even hates.

Hostile situations and high conflict individuals are common in the realms of negotiation and mediation. Hence, one must be aware of what can be done to ensure that the balance of power in his favour. This article is an insight into the methods and measures shared by Mr. Pascal, that could help a negotiator overcome such obstacles during his career.

Awareness of these concepts can have a huge impact on the outcome of a negotiation or mediation. Mr. Pascal effectively communicated the importance of understanding the high conflict people, their mindsets and behavioral patterns. The members at LAWyersclubIndia sincerely thank him for sharing his time and wisdom.

Published in Others
Views : 163