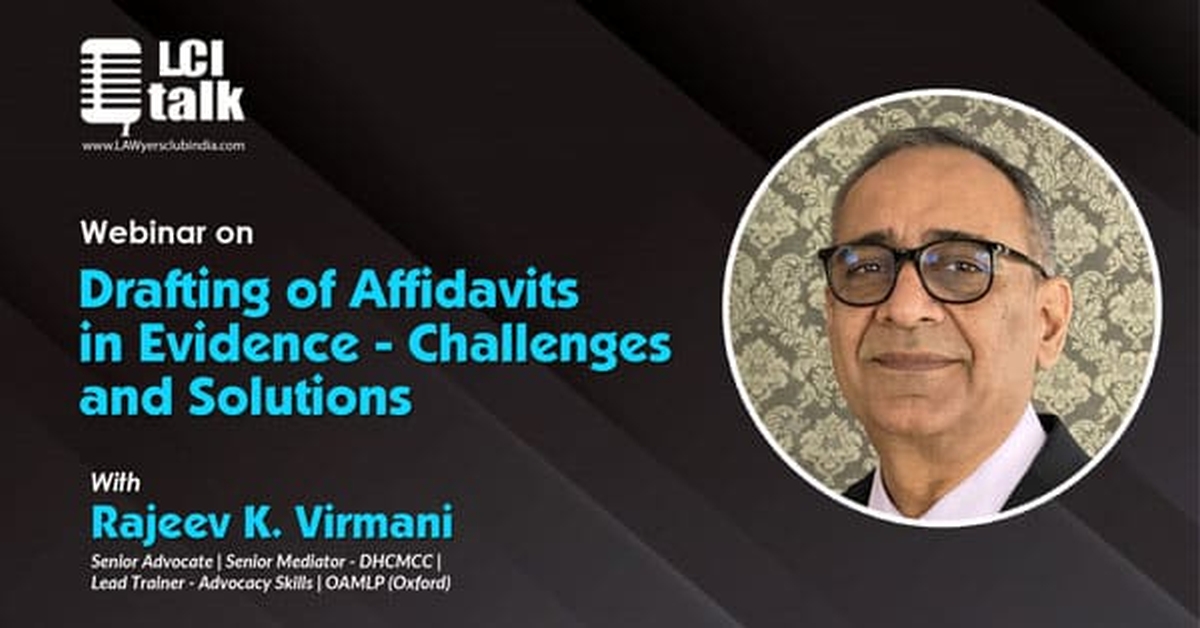 The Webinar will not talk about the civil procedures or aspects or provisions, but practical problems we all face when it comes to drafting of affidavits in evidence which is key to any civil or commercial law case.

Mr Rajeev Virmani after getting a gold medal his LLB degree from Agra university, he started practising in Delhi at Khaitan and Co. in 1981. He started out on his own in 1983, and soon became Advocate on record in Supreme Court. Became part of Indo-British project in 2002 related to advocacy skills training in which he was the lead trainer to 1000 of lawyers. He has also been Senior mediator at Delhi High Court Mediation centre since the inception of the centre in 2006. HE was designated as a Sr Advocate in 2009. After that he also did an advocacy leadership program at oxford university in 2016.As a Sr. Advocate his area of practise is Commercial litigation. Trial is one area he has special expertise in.

Why this Webinar is really important for students and young lawyers?

In law school student don't learn how to draft affidavits so they will learn how to apply basics in complex situations. Important for students and young lawyers to learn these practical aspects like who should be your witness, what and what not to write in an affidavit etc.

What is an affidavit in evidence? Why do we need to think about it?

There was a time when we would be presenting witness standing in court asking them question and they would answer in an oral examination in chief. To speed up things, it was thought that it best that if u r producing u file his affidavit in evidence so that court time is cut short and also gives you and Advantage for preparing something in your chamber.

Oral examination in chief of a witness when reduced in writing is known affidavit in evidence. We file it because now it is allowed to be filed in civil proceedings and arbitration

Court time is saved, one can think what to say, prepare well and present a comprehensive affidavit

In Oral exam - some aspects may be left out and witness might not be able to state what he wants to state.

It is important to not lose out on those advantage so one should know what goes on into making an affidavit in evidence.

Why need to file Affidavit in Evidence?

To prove the case of your client that is in contest. When you file a case, plaint, statement of claim case in an arbitration, you must have realized that there are facts admitted by the opponent, and there are facts that are denied. You need to prove what isfor the relief sought.

Leadingevidence or purpose of evidence is to prove the existence or non-existence of a particular fact that is relevant or that is in issue. To prove what is in issue or a fact whether through documentary evidence, or oral evidence, now we reduce it in writing in advance and file it in the court.

Are pleadings not sufficient?

Answer is no, because in pleadings you don't plead, you don't plead evidence.In pleadings which are plaints, statement of claim, written statement etc you only set out facts in support of your clients claim, they are not supposed to contain evidence and are certainly not the proof.

Once the other side responds you will realize that there are fact and allegations which are disputed and which you need to prove,will be proved by leading evidence.

Next step after pleadings, is proving what is in dispute. That's why we need evidence.

How to select what we need to prove?

What all should the affidavit contain?

How to exhibit docs in affidavit?

While selecting the documents, allocate documents to each chapter divided in your story, so that witness speaksonly on documents which he has knowledge of, which will be proved by evidence.

If you don't have primary evidence (document itself), lay the foundation for secondary evidence (produced by a mechanical process). Keep the provisions of Evidence act and Commercial Courts Act in mind.

If caught in a situation when the person whosigned the documents left company, in proving the document if witness a signatory, opposite side has denied documents, witness can say I have signed and sent through mail etc.

Now, if he is not the signatory but he knows or has seen that other person who signed the document, then he must tell and identify signatures.This shouldn't not be taken forgranted.

People pay the least attention to this, but it is required to verify what para of affidavit is true to the knowledge of the witness, and what is based on information and records which he believes to be true.

What the affidavit should not contain?

Q) How to kickstart a career in law for fresh law graduates?

Ans) Hard work, hard work and hard work. There is no short to success, you have to put in your best, have to be honest to the brief, have to be fair, and that's all u need in this profession.

Q) Does it have to be mentioned in the affidavit that the witness would be deposing on such and such topics?

Ans) If dividing he testimony into baskets, aspects (Tech, comm etc) it is good to set out at very outset that who is going to speak on what, which witness is for which topic. If question asked is not for that aspect, then the witness can respond that there is another witness for this aspect.

Q) Before the proceeding can we prepare witness how to present his version?

Ans) When u sit down to draft affidavit and interview the witness, you talk to witness and let the story emerge from him. The advantage of that is that the witness is being preparedin facing cross examination. It is important to prepare a witness. There is a difference between tutoring and preparing.But preparation starts during drafting only.

Q) Why do we need to have an authorization for witness to depose?

Ans) Incase witness is appearing for and behalf of company and speaking partly from his knowledge and partly from the records of the company.Unless authorized by the company, how can he say he had access to records, which may not normally be available.

When appearing and producing an authorization, it conveys to court that yes here is aperson who is considered right by company.This reduces a lot of cross examination on authorization and other questions. So, it is a good idea to produce authorization.

Q) What is the actual way to contradict a witness, how to record the same?

Ans)There are several ways of doing it, but it requires a lot of preparation. You need to have complete overview of the matter, because when asking questions to witness every answer can be read against you also. Hence, you should know the answer he will give.

How to contradict a witness – this is fact dependent. In a given situation what is it the witness is deposed and what material do you have u have to confront him.

Q) How to prove an email sent by a manager or Vice president of the company, annexing charts and statements prepared by accounts department or any other department.

A. If person is appearing in the witness box, he will definitely bring a print out of that email with its annexure, keep ingredients of evidence act, commercial courts act in mind. The sender and author can always confirm yes, I had sent the mail.

Q) Is WhatsApp chat accepted and how can be proved?

Ans) It is also electronic record. Today you can printout or screenshot under 65B of Evidence Act. You need to preserve the original to prove the sender and receiver of a particular message/

Q) In e-filing of FIR is it necessary to attach the 65B?

Q) If a witness can speak from the records will he be able for instance be able to attest to the truth of the correspondence addressed before he joined employment, since not really the author of the document?

Ans) If correspondence is admitted by accepted by the other side, no difficulty in proving that part of the documentary record. If disputed, then somebody has to come on record to prove that record.

Witness can speak from recordsif no one is there, but it will be a difficult task would as he would have no knowledge of that transaction.

Q) Is the process of drafting of affidavitin evidence in a proceeding before the DRT is the same as the process you follow under CPC?

Ans)Yes, the process is same. What Affidavit in Evidence should contain, the principles are the same, and you should keep those facts in mind.

Q) Explain the objection of not producing the certificate of 65B if not taken in earlier, can it betaken during final argument?

Ans) It is important that objection to any part of the affidavit or any other aspects of examination in chief be it related to document or any contents of affidavit, should be taken when the affidavit is tendered.

Q) What is the recourse if rules of evidence 65B relaxed and arbitrator doesn't agree to the same?

Ans) If really objection to electronic records, you need to put a lot of hard work in cross examination. If email addressed to 3rd party by opponent and not intersay, then you can object to it.

Q) As arbitration is not bound by rules of evidence, is it possible for an arbitratorto waive requirements for proof of electronic evidence, and how does it benefit the proceedings?

Ans)At procedural hearing stage the arbitrators lay down the comp elaborate process they are going to follow.You can always waive the formal proof of electronic records.You can say yes it will be read into evidence. You need to prove content if disputed by the other side.

Q) Hearsay evidence is admissible in some cases, is admission made to 3rd party admissible?

Ans) It all depends upon what the witnesses have said,if acknowledged that have said to 3rd party, and 3rd party admits, then it won't be hearsay and can be admitted.

Q) How to draft an affidavit of evidence of a professional in contract breach matters?

Ans) The general skills need to be kept in mind, like facts and issues, mentioned in the PPT.

Q) Is the exhibit and to mark an evidence the same or different?

Q) Can you explain if witness after filing of affidavit retracts from his earlier statement?

Ans) IT is a situation similar to when a witness leaves a company. You can ask the court for substitute. Hence you should choose your witness properly.

Q) How elaborate or concise should be an affidavit of evidence?

Ans) Affidavit doesn't depend on number of pages. It is on u how youfilter the facts and documents. It can be very concise and do not compare with the plaint as a measure. Also remember the things in mentioned in the Presentation.

Published in Others
Views : 354