All about Marriage Registration in India

Marriage is a socially and legally recognised union between a man and woman that establishes rights and obligations between them. In Hindu law, it is a sacred bond where a man and woman agree to spend the rest of their lives together. In the Special Marriage Act and Muslim law, it is a civil contract between two people.

A marriage certificate is an official statement acknowledging the marital status of a couple.In 2006, the Supreme Court made it compulsory to register the marriage for women protection.

Benefits of a marriage certificate:

• It is an important legal document that proves the personis legally married to someone. 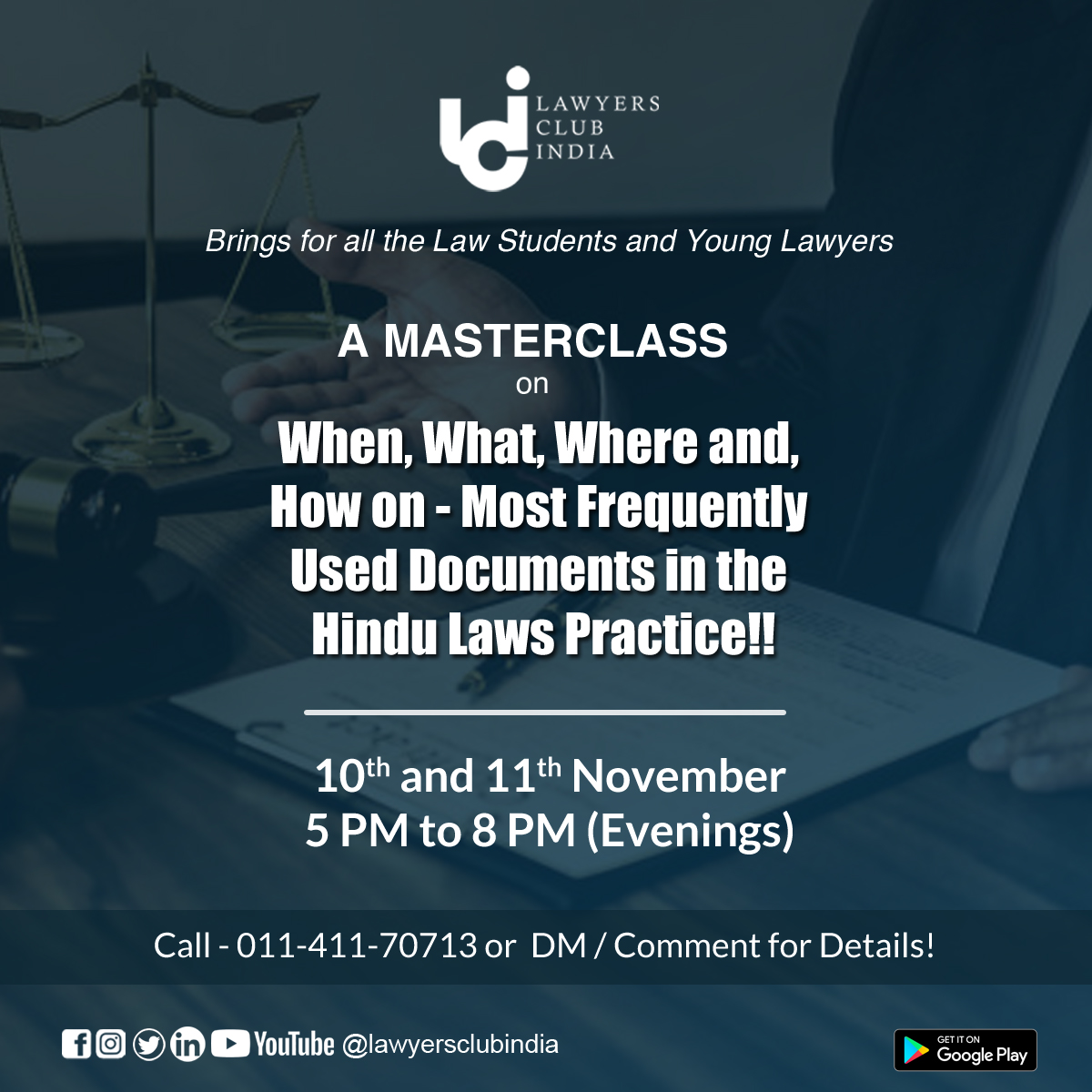 • Extremely helpful in obtaining visas for both husband and wife.

• Foreign embassies in India as well as in other countries, do not recognize traditional marriages, the Marriage Certificate is mandatory for the couple to travel abroad using a spouse visa.

• Enables a spouse in claiming life insurance return or bank deposits in case of the demise of the Insurer or depositor without any nominee.

Section 5 of this act provides for essential conditions for a valid marriage. The conditions are:

• Parties must be Hindu and Hindu include Hindus, Sikh, Buddhist and Jains

• Neither party should have a spouse living at the time of themarriage.

• Parties should be of sound mind and capable of giving consent

• Though capable of giving a valid consent, neither of them has been suffering from mental disorder of such a kind or to such an extent as to be unfit for marriage and the procreation of children,

• Persons who come within the following mentioned prohibited degrees are prohibited.

a) If one is a lineal ascendant of the other

b) If one was the wife or husband of a lineal ascendant ordecedent of the other.

c) If the two are related as brother and sister, uncle and niece,children of two brothers, or of two sisters, etc.

If this condition is violated the marriage becomes void ab initioand the parties become punishable with simple imprisonment for a period of one month of fine or Rs. 10000or with both.

• The parties to the marriage must not be sapindas(lineal ascendant of the other) of each other.Sapinda is 3 degrees onthe mother's side and 5 degrees on the father's side.

Exception: If custom or usage governing each of them permits then they can marry even if they fall under the degrees of prohibited relationship.

• Section 7 of this act states that a Hindu marriage can be solemnized following customary rites and ceremonies of either of the parties and the saptpadi (the taking seven steps by the bride and the groom jointly around the sacred fire).

• Within one month after the marriage is solemnized and conducted as per the Hindu customs and rituals, parties can apply at the office of the Sub-Divisional Magistrate in whose jurisdiction the husband or wife resides.

• Fill the Application form duly signed by both husband and wife.

• Rs. 100/- to be deposited with the cashier of District and the receipt should be attached with the application form.

• Verification of all the documents is carried out on the date of application and a day is fixed for the appointment and communicated to the parties for registration.

• On the said day, both parties, along with a Gazetted Officer who attended their marriage, need to be present before the ADM. The Certificate is issued on the same day.

• Completely filled application form signed by both husband and wife

• a certificate from the priest who solemnized the marriage.

• Separate Marriage Affidavitsstating place and date of marriage,marital status at the time of marriage and nationality from Husband & Wife

• If one of the partners is a foreigner then no Impediment Certificate / NOC from the concerned Embassy and Valid VISA is required.

• All documents must be self-attested

The special marriage act doesn't require the performance of any religious ceremonies for the marriage to be complete. The marriage can be both solemnized and registered by a Marriage Officer. But for a marriage to be legally valid there are certain conditions mentioned in section 4 of this act. These are:

• Neither party should have a spouse living at the time of themarriage.

• Parties should be of sound mind and capable of giving consent

• Though capable of giving a valid consent, neither of them has been suffering from mental disorder of such a kind or to such an extent as to be unfit for marriage and the procreation of children,

• The parties are not within the degrees of prohibited relationship unless a custom governing at least one of the parties permits of a marriage betweenthem.

• Both the parties intending to register the marriage under this act have to give notice thereof in writing in specified forms to the marriage Registrar of that District, where either of the parties has resided for 30 days immediately preceding the date on which such notice is given.

• On the expiry of 30 days, if no objections are received, the marriage shall be solemnised. In case of objection, the marriage officer conducts an inquiry and the marriage is solemnized after the inquiry concludes.

• Rs. 150/- to be deposited with the cashier of District and the receipt should be attached with the application form.

• After that on the date of registration, Both parties along with three witnesses and basic identification documents are required to be present.

• Application form signed by both the parties

• If one of the partners is a foreigner then no Impediment Certificate / NOC from the concerned Embassy and Valid VISA is required.

In many Indian cities and states, a marriage can be registered online but not in all Indian states. It is a simple process to apply for a marriage certificate online. Follow the given below instructions;

• Search for Online Marriage Registration and select the government website.

• Select your district and continue

• Fill in the Marriage Certificate form

• Choose the date of appointment

After submission, an acknowledgment slip will appear with all the relevant details of your appointment and instructions to be followed. Take a printout of the acknowledgment slip and the application form. On the date of the appointment, visit the office with the supporting documents and get the marriage certificate from SDM.