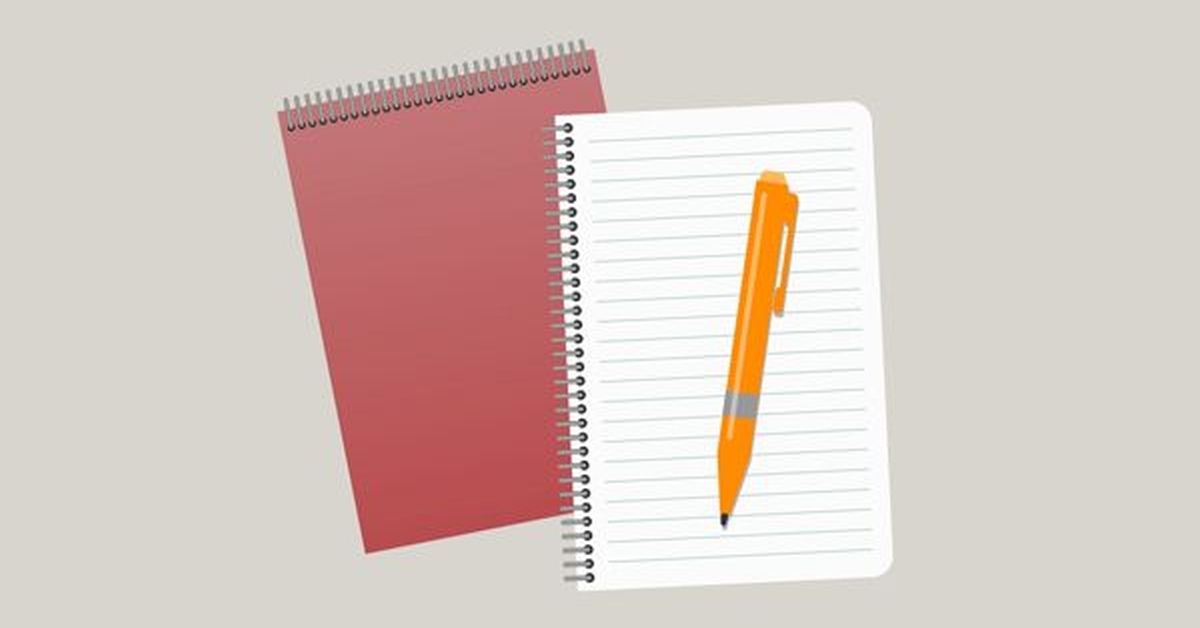 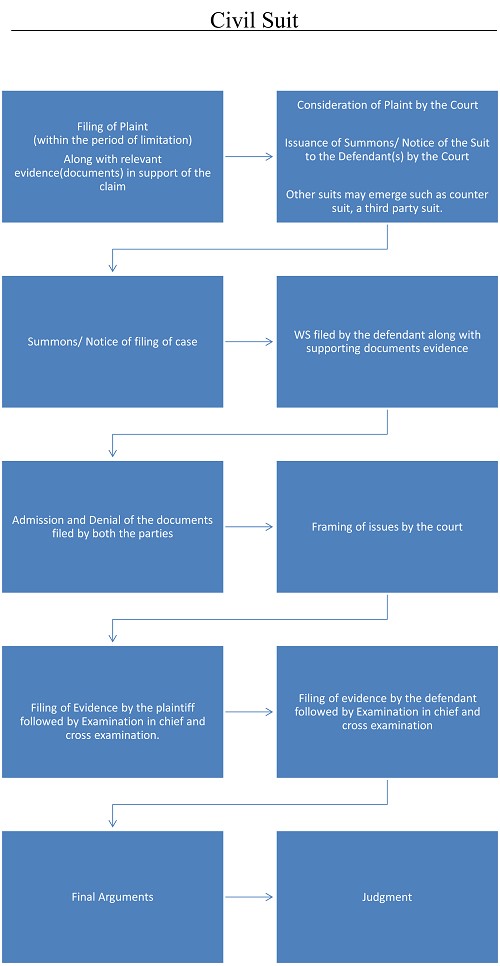 
Various categories of Cases in a Civil Court:

2. Breach of Contract Claims - When a party breaks the agreement. For example:

4. Class action claims- The plaintiff is actually a group of people & class action suits are similar to tort cases. For Example: A company that exposes people to hazardous substances. Can be many

Stages of a Civil Suit

Plaint under order VII of the CPC means the statement of claims made by the Plaintiff. These are the material facts.

Written Statement under order VIII of the CPC Statement of defence made by the Defendant dealing with each material fact in Plaint.

Factors to be considered before drafting a document

The Plaint should include-

1. Number of the suit (including year)

2. Title or Cause Title-

[Description includes- name of the father, age and particulars necessary to identify the person]

2. Body of the Plaint

Formal portion which shall include

Substantial Portion which shall include

I. Matters of inducement or introductory facts Shall include Statement of all the facts constituting the Cause of Action. It is important to state in properly because non-showing of Cause of Action his Plaint is ought to be rejected.

II. Particulars of those facts which are necessary.

Different kinds of reliefs are claimed in a plaint which can be recovery of debt, damages, or movable property; possession of immovable property, declaration of title, specific performance, injunction etc.

If a Plaintiff can claim more than one relief on the same Cause of Action, the plaintiff must claim all; otherwise he shall not be entitled to bring a new suit for omitted reliefs, unless the omission was with the leave of the Court. [Order II R2]

Damages are of two kinds: -

The Defendant requires filing a written statement of his defence under Order VIII R1 as amended by the 2002 amendment Act within 30 days the service of summons on him which can be extended to 90 days according to the proviso.

It is the duty of the Defendant to raise all the pleas in the Written Statement else Plaint averments are deemed to be admitted and the pleas not raised cannot be allowed to be raised at the hearing.

A 'subsequent pleading' by the Plaintiff, either in reply to Defendant's claim of set-off or Counter Claim or with leave of the Court, in answer to Defendant's pleas in defence, is also called a “written statement” (also called Replication or Rejoinder)

Please Note-Examine Plaint carefully to understand the claim. If any fact/particular is required by Defendant to draw up his defence then he must apply for the Plaintiff to provide it before Defendant drafts written statement. He may apply for inspection/ discovery of documents

When do I file an affidavit?

The deponent requires to finish an affidavit under R15(4) CPC in support of his/her pleadings. This is further required by section 26(2) of the Code which deal which institution of suits. It requires in every Plaint to be proved by an affidavit.

Affidavit is required in addition of verification to put an extra burden on the parties to:

a. Not to submit incorrect and frivolous pleadings

b. To be more responsible

c. Not to burden the courts with irrelevant pleadings.

Only attach documents that are essential to establish your case.

If you are illiterate, you must have had the affidavit read to you.

Affidavit must be sworned or affirmed in front of a qualified person.

Verification means checking or proof reading of the pleadings. Every pleading needs to be verified under Order 6 Rule 15 (1) of CPC. A party or one of the parties may verify the pleadings.

Vakalatnama is a species of Power of Attorney. It is that important document, which enables and authorizes the pleader appearing for a litigant to do several acts as an Agent, which is binding on the litigant who is the principal. It is a document which creates the special relationship between the lawyer and the client.

Q. A is residing on B's property as a tenant. A constructed two rooms on the rented property with the consent of the owner. Now A is facing problems by the employees of B and is forced to disposes the said property forcibly. What shall A do?

A. The aggrieved party shall file a suit for permanent injunction. Draft of the suit and other documents are attached below.

1. That the plaintiff is the permanent resident of the above-mentioned address in property bearing no. ________ Uttam Nagar, New Delhi for the last many year and is living with wife and minor children, as a tenant.

5. That the plaintiff is having the whole necessary household goods which are lying/kept in the above said premises and is living peacefully.

7. That on dt. 30.1.2015 the above said defendant came to the above said premises of the plaintiff and threatened the plaintiff to vacate the tenanted premises immediately otherwise the plaintiff would have to face dire consequences, when the plaintiff asked about their identity then they did not disclose the same, instead started throwing household goods forcibly and illegally and started to quarrel with the plaintiff when the local residents/neighbors intervened in the matter then the defendants left the spot after threatening for dire consequences and to dispossess the plaintiff forcibly and illegally in the near future with the help of local goondas. The defendants openly stated that the staff of police post Matiala dances at their tune and it is very easy job for them to dispossess any person or to grab the property of any one with the help of the police staff.

9. That on 10.2.2015, the plaintiff sent a Registered Notice to the defendant no. 1 and copy to Chowki in charge Police Post Matiala by Regd. A.D. (copy of the same is enclosed herewith) but P.P. Matiala staff has not taken any action against the defendants for reasons best known to them.

12. That the plaintiff has no other efficacious remedy except to approach to this Hon'ble court for seeking relief of injunction against the defendants from interfering in the peaceful possession of the premises no. __________Uttam Nagar, New Delhi.

14. That the parties to the suit for the purpose (s) of court fee and jurisdiction is ........ on which the requisite court fee has affixed.

It is, therefore most respectfully prayed that this Hon'ble Court may be pleased to: -

a. Pass the decree for Permanent Injunction in favor of the plaintiff and against the defendants thereby restraining the defendants, their representatives, employees, agents etc. from dispossessing the plaintiff forcibly and illegally from the tenanted premises bearing no. _______ Uttam Nagar, New Delhi and also from interfering in the peaceful possession of the above said premises.

b. Award cost of the suit in favour of the Plaintiff and against the Defendants;

c. Pass such other and further order(s) as may be deemed fit and proper on the facts and in the circumstances of this case.

[NOTE: This plaint has to be supported by an affidavit and Verification]

1. That the suit is barred by limitation under Article .......... of the Limitation Act and is liable to be dismissed on this short ground alone.

3. That the suit has not been properly valued for the purpose of court fees and jurisdiction and is therefore liable to rejected out rightly.

4. That there is absolutely no cause of action in favour of the Plaintiff and against the Defendant. The suit is therefore liable to be rejected on this ground also.

6. That the suit is bad for mis-joinder of Z.

9. That the suit has not been properly verified in accordance with law.

10. That the Plaintiff's suit for permanent injunction is also barred by Section 41 (i) of the Specific Relief Act because he has not approached this Hon'ble Court with clean hands and his conduct has been most unfair, dishonest and tainted with illegality.

11. That the Plaintiff's suit for declaration is barred by Section 34 of the Special Relief Act as the plaintiff has omitted to claim further consequential relief available to him.

12. That the suit is barred by Section 14 of the Specific Relief Act as the contract of personal service cannot be enforced.

13. That the suit is liable to be dismissed outrightly as the Plaintiff has not given the mandatory notice under Section 80 of the Code of Civil Procedure/Section 14 (1) (a) Rent Control Act/Section 478 of the Delhi Municipal Corporation Act.

14. That the suit is liable to be dismissed as the Plaintiff firm is not registered under Section 69 of the Indian Partnership Act and as such is not competent to institute this suit.

15. That the present suit is barred by Section 4 of the Benami Transaction (Prohibition) Act, 1988, and is therefore liable to be dismissed outrightly.

1. That para 1 of the plaint is correct and is admitted.

2. That the contents of para 2 of the plaint are denied for want of knowledge. The Plaintiff is put to the strict proof of each and every allegation made in the para under reply.

4. That with respect to para 4 of the plaint, it is correct that the Defendant is in possession of the suit properly. However, the remaining contents of para under reply are absolutely incorrect and are denied.

11. That para 11 of the plaint is incorrect and is denied. There is no cause of action in favour of the Plaintiff and against the Defendant because....................... The plaintiff is therefore liable to be rejected outrightly.

13. The para 13 is not admitted. The suit has not been properly valued for the purpose of court fee and jurisdiction. According to the Defendant the correct valuation of the suit is Rs...................

It is, therefore most respectfully prayed that this Hon'ble Court may be pleased to:

a) Dismiss the suit of the plaintiff.
b) Award costs to the defendant.
c) Pass any other just and equitable order as deemed fit in the interest of justice.

[NOTE: Counter Claim, set off can be joined in the Written Statement and the same may be verified and supported by affidavit]