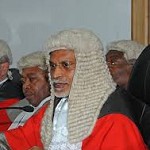 I would like to begin by evoking the Preamble of the Indian Constitution, which encapsulates our vision for a Glorious Bharat. It is articulated thus:

“We, the people of India, having solemnly resolved to constitute India into a Sovereign Socialist Secular Democratic Republic and to secure to all its citizens:

EQUALITY of status and of opportunity; and to promote among them all;

FRATERNITY assuring the dignity of the individual and the [unity and integrity of the Nation];

The vision for glorious Bharat was thus carved in our Constitution in 1949, when differing political and social thoughts converged; reconciled, conceived and tuned in consonance, under the wise leadership of the great legal mind Dr. Babasaheb Ambedkar. The Constitution of India was born; not of a political revolution, but of a social revolution, triggered by great leaders and intellectuals of that time, who after meticulously analyzing all socio-political and economic conditions and territorial status, which existed then in India, and crafted the Constitution accordingly. They provided for all contingencies, which they could foresee what humanly possible, at that point in time, but none can obviously, go beyond with a foresight of a prophet and provide for all, with a divine precision and perfection.

Finally, with much intellectual labour it was enacted, adopted with inevitable transitional or temporary provisions such as Articles 370, and delivered to ourselves through our Constituent Assembly. Incidentally, the Constitution being an organic living document, it is incumbent on us to nurture continuously preserving its basic structure and treasure it for the generations to come. At the same time, the framers of the Constitution obviously, could not have incorporated temporary provisions therein with an intent to keep them permanent and remain sacrosanct forever on the shiny pages of the Constitution, since that would defeat the very purpose, rationality and constitutional wisdom of the makers of it.

Seventy years ago, we began our voyage, a voyage of political exploration entering Swaraj, a Raj of our own, without any epithet, vituperative or otherwise. We embarked on our Constitution, setting sail on the ocean to reach our promised land with an adorable  Dream of Glorious Bharat,  a “Bharat Dream” - If I may call it that -  a dream of a Modern Sovereign Socialist Secular Democratic Republic to proudly stand tall, amongst the comity of nations as “Bharat Maatha”, gracefully unified from Kashmir to Kanyakumari, and invincibly strong from top to toe, in which life was better, richer and fuller for every son and daughter of Great Bharat, without discrimination, whether based on race, colour, caste, religion, creed, sexual orientation, regionalism or linguicism or economic status or political ideology ; with equality of opportunity to enjoy freedom, justice, welfare, fraternity, prosperity, peace and unity. Our dream was not based on an illusion, but on a vision that sprouted from our glorious past and our resilience to resurrect and go beyond the obvious, to see the invisible and touch the future for posterity.

“Bharat Dream” was not about problem-solving, but the pre-emption and prevention of problems, which had invaded, divided and eclipsed our past with darkness, for many centuries.  We thus, decided to rewrite our political destiny by our own hands and started to rebuild our “Bharat” regaining our sovereignty, unity and territorial integrity. We had to pick up the broken pieces from the past, including its inevitable Greek-branded name “India”, after nearly one thousand shattering years of invasions, divisions, killings, lootings and political enslavements.

"Bharat Dream" has now taken shape with roots that give it a stronghold on ground realities, and wings that give it the ability to fly and reach new heights. It is beautifully animated in the Preamble of our Constitution, which is the key to reaching into the minds of the framers of it. They envisioned that we, as one people and one nation, create a classless and just society for all. As the largest democracy on this planet, comprising more than one-sixth of the world population, we serve as a role-model for a harmonious multi-racial, multi-religious, multi-cultural, multi-ethnic and multi-linguistic society.  The framers of our Constitution recognised the inherent dignity, equality and inalienable rights of all members of human family and oneness of humanity, as deep-rooted in our ancient philosophy - Vasudeva kutumbakam and Yaathum oore yaavarum keleer.

However, it is not an easy task to navigate and sail through the Indian Ocean of turbulent politics and realize our constitutional goals and reach the promised land, within a given timeframe. Despite many unforeseen constraints, we are still successfully sailing through and continue rebuilding “Glorious Bharat” in a style, speed and a design of our own.

The provisions of our Constitution are not magic wands that can bring miraculous remedies to all our social-ills and injustices of the past and present. They are not mathematical formulas having their essence in their form to provide quick fix solutions to our long-term problems. They are indeed, organic living institutions, whose seedlings transplanted but grown on our soil of unique history, ethos and values. Their growth through judicial interpretation and intervention is vital, not formal. At present such growth is the need of the hour, so as to translate our constitutional vision and dreams into reality and touch the future.

We have to keep the Constitutional path to social justice clear of all obstructions. We need to cut out the dead wood along the path, from time to time and trim off the side branches that impede our path and vision.  As we advance as a vibrant nation of youths, old order ought to change, yielding place to new, opening new vistas!

Besides, the Indian Diaspora around the globe, should also join hands to renew our solemn pledge and unwavering commitment to continue, contribute, invest, promote and empower our New Bharat in every step and aspect, of its progressive growth and sustainable development so that our Constitutional vision and the aspirations of the people are realized to the fullest. The people of Indian Diaspora, should renew their commitment to participate actively in the sustainable economic and social development of the New Bharat; and, in the creation of an adequate and progressive social order, which guarantees not only fundamental human rights and freedoms, but also food, clothing, shelter, education, health and a steadily rising standard of living for all people of India, especially for the poor, downtrodden and the marginalized.

Before I conclude, I would like to say what some of us may not like to hear, but nevertheless, it must be stated. We may have the best Constitution in the world; our constitutional vision could have been the most adorable one; we may have the highest pool of talent in the world after the USA; we may have all potential and more natural resources than many other developed countries in the world. But, the ultimate success of our Constitution, and realization of the “Bharat Dream” primarily, depends upon the quality of the people, their actual performance of the constitutional duties as law abiding citizens, and their selfless role and contribution in nation-building. To make that Dream come true, every member of the Indian Diaspora, whichever part of the world they come from, and every citizen of India - whether he or she is a vociferous urban student of a university or a jaundiced member of any vested interest groups in the guise of a student, who seems to behave anti-social and anti-national challenging the very foundation of our democracy, civility and rule of law, or a voiceless rural farmer from any remote village of India - we all, irrespective of our position in the social or political hierarchy, require the highest degree of nationalism, loyalty, unity, integrity, social responsibility and above all a patriotic spirit giving life-force to the heart and soul of Bharat Maatha.

We, the right thinking people of India, cannot and should not continue to remain silent, indifferent, divided and turn a blind eye to the ground realities, the disruptive forces of division, casteism, communalism, religious-fanaticism, regionalism, linguicism, vandalism, hooliganism, terrorism etc. and continue to lie lethargic, for too long, while all such destructive “isms” are indoctrinated, propagated, promoted in the minds of the vulnerable, and crimes are instigated and perpetrated sadly, in the deviant name of freedom and democracy. To achieve “Bharat Dream” it is necessary to wake up and act in good time so that the 'Unity, harmony and Integrity of India' can be preserved by a spirit of common brotherhood, fraternity, mutual understanding and respect for each other’s rights and limitations.

The exercise of one’s rights is always subject to non-infringement of the rights of the others. There is a story that an Englishman walked along swinging his walking stick and it struck the nose of another person. When the injured person objected, the wielder of the stick said that England had ensured freedom to all people and that in swinging his stick he was only exercising his right. The objector then replied “Sir, your freedom ends where my nose begins”.

Let us own, and share the responsibility for preserving the institution of democracy and rule of law. Let us work together to build a glorious Bharat, which is economically strong, environmentally clean, free from the scourge of poverty, crime and corruption. Dear youths of India, dare to dream a glorious Bharat, which is leading in world trade and commerce, science and technology, breaking new grounds in innovation and creativity and more. We all should do whatever it takes and empower India to realize the “Bharat Dream”, make this great land a better place to live in, and to secure the rightful place, which it deserves in the new world order.

In the life of any nation, seventy years of independence is a period long enough for constitutional introspection, reflection and stock-taking to fine-tune and sharpen their vision. It is the need of the hour brothers and sisters, that we ought to fine-tune and focus on our Constitutional vision and sharpen the Constitutional tools if necessary, to meet the changing and challenging needs of our time and society to preserve unity in diversity, to protect national security and territorial integrity. The time is now and here; all should awake, unite, arise and stop not till the constitutional goals are reached; and the Baharat Dream is realized.  Thank you all for listening to me and for your kind indulgence.