How, when & where to file a writ of mandamus 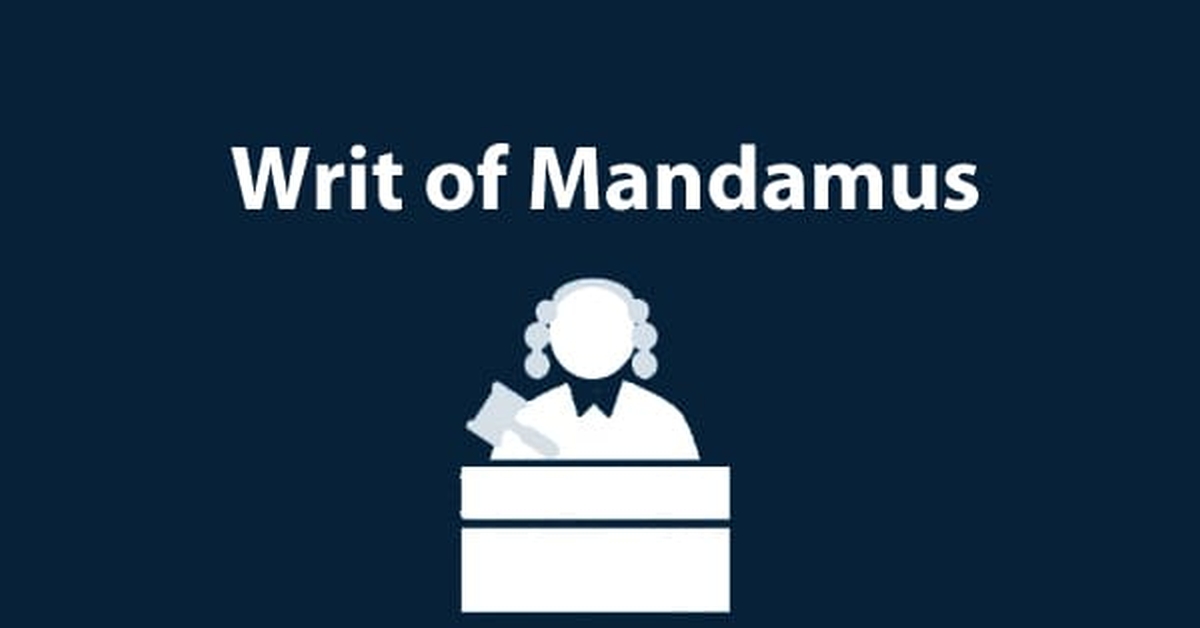 A writ of mandamus is a court order issued by a judge at a petitioner's request compelling someone to execute a duty that they are legally obligated to complete. A writ can also be issued when the authority of a higher court is required to order a lower court or government agency to complete a duty to uphold the law or to correct an abuse of discretion.

The party requesting a writ of mandamus to be enforced should be able to show that they have a legal right to compel the respondent to do or refrain from doing the specific act.

The duty sought to be enforced must have two qualities :

'It must be a duty of public nature and the duty must be imperative and should not be discretionary. Furthermore, mandamus will typically not be granted if adequate relief can be obtained by some other means, such as an appeal.'

The purpose of mandamus is to remedy the defects of justice. It lies in the cases where there is a specific right but no specific legal remedy for enforcing that right. Generally, it is not available in anticipation of any injury except when the petitioner is likely to be affected by an official act in contravention of a statutory duty or where an illegal or unconstitutional order is made. The grant of mandamus is therefore an equitable remedy; a matter for the discretion of the court, the exercise of which is governed by well-settled principles.

Mandamus being a discretionary remedy, the application for it must be made in good faith and not for indirect purposes. Acquiescence cannot, however, bar the issue of mandamus. The petitioner must, of course, satisfy the Court that they have the legal right to the performance of the legal duty as distinct from mere discretion of authority. A mandamus is normally issued when an officer or an authority by compulsion of statute is required to perform a duty and that duty, despite demand in writing, has not been performed. In no other case will a writ of mandamus be issued unless it be to quash an illegal order.

The sine qua non for mandamus is the existence of a statutory public duty incumbent upon the person or body against whom the mandamus is sought. There must equally co-exist a corresponding right in the petitioner entitling him to claim the enforcement of such public duty. These two preconditions form the foundation for the issue of mandamus. The primary scope and function of mandamus is to "command" and "execute" rather than to "enquire" and "adjudicate". It cannot be issued to change the decision of a body so as to suit the petitioner. Obligations which are not of statutory nature cannot be enforced by mandamus.

Writ of mandamus is available against any public authority including administrative and local bodies, and it would lie against any person who under a duty imposed by a statute or by the common law is obliged (and is duty-bound) to do a particular act. In order to obtain a writ or an order (or direction) in the nature of mandamus, the applicant has to satisfy (the court of law) that he has a legal right towards the performance of a legal duty by the party (or person) against whom mandamus is sought and such right must be subsisting on the date of the petition.

Courts in India have always maintained that, a writ of mandamus is not a writ of right and is not granted as a matter of course. Its grant (or refusal) is at the discretion of the court. Courts can refuse mandamus, unless, it is shown that there is a clear legal right of the applicant or statutory duty of the respondent and there is no alternative remedy available to the applicant.

In the case of, Praga Tools Corporation v. C.A. Imanualix, the Supreme Court of India observed that, an order of mandamus is, in form, a command directed to a person, corporation or inferior tribunal requiring him (or them) to do a particular thing therein specified, which appertains to his (or their) office and is in the nature of a public duty. It is, however, not necessary that the person or body on whom such public duty is imposed need to be a public official or statutory authority.

In the case of Union of India v. S.B. Vohraxi, the Supreme Court of India held as follows: 'A writ of mandamus may be issued in favour of a person who establishes a legal right in himself. It may be issued against a person who has a legal duty to perform but has failed or has neglected to do so. Such a legal duty emanates by operation of law. The writ of mandamus is most extensive in regards to its remedial nature. The object of mandamus is to prevent disorder emanating from failure of justice and is required to be granted in all cases where law has established no specific remedy'.

The Court has power, by the prerogative writ of mandamus, to amend all errors which tend to oppress the subject (resulting in misgovernment) and ought to be used, when the law has provided no specific remedy, and justice and good government require that there ought to be one for the execution of the common law or the provisions of a statute. Instead of being astute to discover reasons for not applying this great constitutional remedy for error and misgovernment, we think it our duty to be vigilant to apply it in every case to which, by any reasonable construction, it can be made applicable.'

Mandamus takes the shape of a command to an inferior court, governmental body, public officer, executive (or administrative) body for doing something, or for abstaining from doing something, that which is in the nature of a public duty. The doing or forbearance of that which is sought, is to be enforced as a „mustâ€Ÿ, under any law for time being in force and it should be clearly incumbent on the officer or authority concerned, in its public character. It does not lie to enforce a private right, neither to enforce a duty of a purely ministerial nature (which the officer is bound to perform under the orders of a competent authority), nor in regards to matters which are purely of discretionary nature. Interference by the court is warranted when an executive authority is not exercising its power bona fide for the purposes contemplated by law or is influenced by extraneous (and irrelevant) consideration or is acting arbitrarily.

'The prerogative remedy of mandamus has long provided the normal means of enforcing the performance of public duties by public authorities of all kinds. Like the other prerogative remedies, it is normally granted on the application of a private litigant, though it may equally well be used by one public authority against another. The commonest employment of mandamus is as a weapon in the hands of the ordinary citizen, when a public authority fails to do its duty. Certiorari and prohibition deal with wrongful action, mandamus deals with wrongful inaction.'

In a case, Comptroller & Auditor General of India v. K.S. Jagannathan, the Supreme Court of India held that, the High Courts of India exercising their jurisdiction under Article 226 have the power to issue a writ in the nature of mandamus, to pass orders (and to give necessary directions) where the government (or a public authority) has failed to exercise or has wrongly exercised the discretion conferred upon it by a statute or a rule or a policy decision of the government or has exercised such discretion mala fide or on irrelevant considerations or by ignoring the relevant considerations and materials or in such a manner as to frustrate the object of conferring such discretion or the policy for implementing which such discretion has been conferred. In all such cases and in any other fit and proper case a High Court can, in the exercise of its jurisdiction under Article 226, issue a writ of mandamus to give directions to compel the performance in a proper and lawful manner of the discretion conferred upon the government or a public authority, and in a proper case, in order to prevent injustice resulting to the parties concerned, the court may itself pass an order which the government (or the public authority) should have passed (or given) had it properly and lawfully exercised its discretion.

Though, the main function of mandamus is to compel action. Writ of mandamus neither creates nor confers power to act; for it only commands the exercise of power already existing, when it is the duty of the person or authority proceeded against- to act. Although mandamus may require performance of public duty, its command is never to act in a particular manner.

It is not possible to lay down the standard- as to in what situations a writ of mandamus will be issued and in what situations it should not be issued. It depends on the nature of the right sought to be protected; duty sought to be enforced; scheme of the statute; injury likely to be caused; consequences likely to ensue; consequent effect of the exercise (or non-exercise) of the power and other similar considerations.