I am looking for activist lawyers, journalists, translators and other activists who are ready to support (free of charge) the promotion of my PIL on USSR CASE to achieve registration of this PIL under the permanent number in the Supreme Court of India and publish information about my PIL in all official and alternative media around the world.
This PUBLIC INTEREST LITIGATION have Diary No. 14060 of 2020, filed on 07-07-2020 in the Supreme Court of India. I am the petitioner-in-person in my PIL.
Before reading the article, please familiarize yourself with these indicated laws, which are directly related to the article below, NOTE:

The Indian Evidence Act, 1872:
Section 57 (clause 8).
Facts of which Court must take judicial notice:
The Court shall take judicial notice of the following facts:
(8) The existence, title and national flag of every State or Sovereign recognized by the Government of India;

Quote from Charter of the United Nations:
CHAPTER XIV: THE INTERNATIONAL COURT OF JUSTICE
Article 95
Nothing in the present Charter shall prevent Members of the United Nations from entrusting the solution of their differences to other tribunals by virtue of agreements already in existence or which may be concluded in the future.

Article I, Article V, Article IX and Article XI of the TREATY OF PEACE, FRIENDSHIP AND COOPERATION BETWEEN THE UNION OF SOVIET SOCIALIST REPUBLICS AND THE REPUBLIC OF INDIA of August 9, 1971:

Article I
The High Contracting Parties solemnly declare that enduring peace and friendship shall prevail between the two countries and their peoples. Each Party shall respect the independence, sovereignty and territorial integrity of the other party and refrain form interfering in the other's internal affairs. The high Contracting Parties shall continue to develop and consolidate the relations of sincere friendship, goods neighborliness and comprehensive cooperation existing between them on the biases of the aforesaid principles as well as those of equality and mutual benefit.

Article V
Deeply interested in ensuring universal peace and security attaching great importance to their mutual cooperation in the international field for achieving those aims, the High contracting Parties will maintain regular contracts with each other on major international problems affecting the interests of both of States by means of meetings and exchanges of views between their leading statesmen, visits by official delegations and special envoys of the two Governments, and through diplomatic channels.

Article IX
Each High Contracting Party undertakes to abstain from providing any assistance to any third party that engages in armed conflict with the other Party. In the event of either Party being subjected to and attach or a threat thereof, the High Contracting Parties shall immediately enter into mutual consultations in order to remover such threat and to take appropriate effective measures to ensure peace and the security of their countries.

Article XI
This treaty is concluded for the duration of twenty years and will be automatically extended for each successive period of five years unless either High Contracting Party declares its desire to terminate it by giving notice to the other High Contracting Party twelve months prior to the expiration of the Treaty. The Treaty will be subject to ratification and will come into force on the date of the exchange of Instruments of Ratification which will take place in Moscow within one month of the signing of this Treaty.

USSR 30 years could not break through

to its place at the UN -
this is 30 years of illegitimate work of the UN!

Is there continuity or succession and identity - for purposes of international law - between the former Soviet Union and the Russian Federation?

December 8, 1991 Another coup d'état took place - B. Yeltsin, L. Kravchuk and S. Shushkevich, as former heads of republics, usurped all power in the USSR during the transition period for opposing purposes that did not correspond to the results of the USSR all-Union referendum of March 17, 1991, and they made a false statement about the alleged downfall of the USSR in their illegitimate document The Belovezhsky Agreement, which was signed on behalf of the Republic of Belarus (BSSR), RSFSR and Ukraine (Ukrainian SSR) to create the Commonwealth of Independent States (CIS).

In the preamble of this document, they stated, I quote:

"that the USSR, as a subject of international law and a geopolitical reality, is ceasing to exist."

The logical legal conclusion that should have been drawn from this statement thus seems to be clear: with the demise of the Soviet Union itself, its membership in the UN should have automatically lapsed and Russian Federation (more precisely, the RSFSR) should have been admitted to membership in the same way as the other newly-independent republics (except for Belarus and Ukraine). As already stated by the UN General Assembly’s Sixth Committee in 1947, the rights and obligations of membership of a State cease to exist ‘with its extinction as a legal person internationally recognized as such’.

Thus, the UN has been working illegitimately for the past 30 years, because:

2) One republic the RSFSR is not equal to the whole Union, that is, the USSR, and therefore it cannot replace the whole Union in UN and cannot be the successor or continuator of the entire Union.

3) Moreover, the Russian Federation does not exist at all (see my Synopsis in the PIL on USSR CASE) and therefore it cannot be the successor or continuator of the USSR.

5) Also, the Commonwealth of Independent States (CIS) cannot declare itself the successor or continuator of the USSR, since this is not a country, but an organization, moreover, this is international organization that was created illegitimately and the countries belonging to it allegedly declared themselves independent from the USSR - therefore, because they independent of the USSR, they cannot be the successor or continuator of the USSR.

6) Therefore, Yeltsin's letter to the UN dated December 24, 1991 about membership in the UN is illegitimate, especially since Yeltsin was never the president of the USSR or the RSFSR, because the citizens of the USSR voted to preserve the USSR in the all-Union referendum of the USSR on March 17, 1991, and there is no president in the Soviet legislation of the USSR. Therefore, the UN had no right to accept the Russian Federation as a UN member in the place of the USSR.

This means that the UN has been working illegally for 30 years. In accordance with its Charter, the UN cannot exist and work without the USSR, which is a permanent member of the UN Security Council and is a member of the UN Trusteeship Council.

But the USSR still exists legally and physically, so the UN should be completely cleansed and its entire current composition should be completely replaced with a new one from the people, and the old UN composition should be brought to justice - in court that will be similar to the Nuremberg Tribunal of 1945 -1946, as this people of the old UN composition conducted their illegitimate and criminal activities as fascists of Hitlerite Germany during the Second World War.

Absolutely all projects, documents, decisions and decrees, contracts, etc. from the UN, including on the pandemic and vaccination, published over the past 30 years during the illegitimate presence in the UN of an organized criminal group called the Russian Federation/Russia and members of a criminal organization called the Commonwealth of Independent States (CIS) – are invalid, illegal.

Therefore, absolutely all restrictions associated with a fake pandemic in all countries must be lifted immediately.

Can the UN work and exist without the USSR? No!

The absence of the USSR in the UN leads to a constitutional crisis that completely paralyzes the UN, since the place of the USSR as a permanent member in the Security Council was left without the owner (see Article 23 (1) of the UN Charter).

In the UN Charter in Article 23 of CHAPTER V: SECURITY COUNCIL, the composition of the UN Security Council is clearly indicated and even permanent members with the name of the country are listed.

All permanent members are still listed there under the same name of countries, and there is no name of the Russian Federation. I am citing this article:

2.     The non-permanent members of the Security Council shall be elected for a term of two years. In the first election of the non-permanent members after the increase of the membership of the Security Council from eleven to fifteen, two of the four additional members shall be chosen for a term of one year. A retiring member shall not be eligible for immediate re-election.

3.     Each member of the Security Council shall have one representative.

Below are other articles of the UN Charter that clearly and unequivocally state that the UN cannot work and exist without at least one permanent member of the UN Security Council, that is, without the USSR.

Quote from Charter of the United Nations:

The Members of the United Nations agree to accept and carry out the decisions of the Security Council in accordance with the present Charter.

1.     Each member of the Security Council shall have one vote.

2.     Decisions of the Security Council on procedural matters shall be made by an affirmative vote of nine members.

3.     Decisions of the Security Council on all other matters shall be made by an affirmative vote of nine members including the concurring votes of the permanent members; provided that, in decisions under Chapter VI, and under paragraph 3 of Article 52, a party to a dispute shall abstain from voting.

1. The Trusteeship Council shall consist of the following Members of the United Nations:

2. such of those Members mentioned by name in Article 23 as are not administering trust territories; and

3. as many other Members elected for three-year terms by the General Assembly as may be necessary to ensure that the total number of members of the Trusteeship Council is equally divided between those Members of the United Nations which administer trust territories and those which do not.

2. Each member of the Trusteeship Council shall designate one specially qualified person to represent it therein.

The International Court of Justice shall be the principal judicial organ of the United Nations. It shall function in accordance with the annexed Statute, which is based upon the Statute of the Permanent Court of International Justice and forms an integral part of the present Charter.

1.     All Members of the United Nations are ipso facto parties to the Statute of the International Court of Justice.

Nothing in the present Charter shall prevent Members of the United Nations from entrusting the solution of their differences to other tribunals by virtue of agreements already in existence or which may be concluded in the future.

PIL on USSR CASE is a lawsuit in the form of a PUBLIC INTEREST LITIGATION (PIL) on the USSR case, which I filed in the Supreme Court of India on 07.07.2020 regarding the unlawful collapse of the Soviet Union and the illegality of any activity of organized crime group "Russian Federation / Russia", and the CIS, and the so-called "former republics" of the USSR, and the UN and its bodies (including WHO) – within the framework of the PIL under the case number: Diary No. 14060 of 2020. 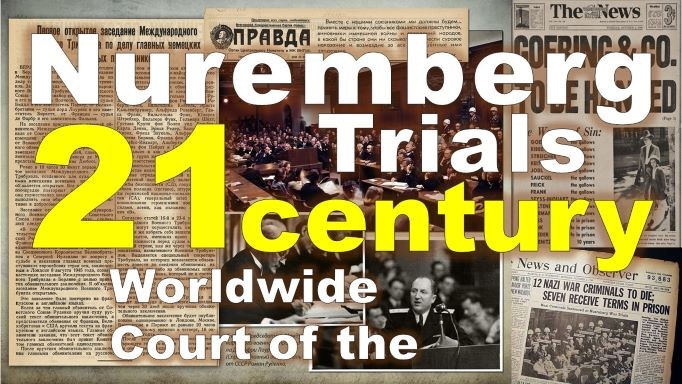