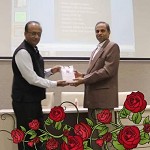 How can the life of such a man
Be in the palm of some fool's hand?
To see him obviously framed
Couldn’t help but make me feel ashamed
To live in a land where justice is a game,


Sang Bob Dylan in his song “Hurricane” not knowing that the same will hold good for the new generation DNA experts deposing evidence in Indian Courts giving false positive results without as much as batting an eyelid. I am not saying this without basis. In one particular case on the file of the District and Sessions Judge Ranga Reddy Court, Andhra Pradesh the DNA expert from the local Forensic Laboratory furnished a report wherein she, in the first page reported that their was no DNA isolated from the Crime scene sample but in the same breath continued on the second page of her report that the DNA profile of the Crime scene sample matched with that of the accused person. Thanks to the Vigilant trial Court Judge that he summoned me as witness and got me examined to bring out the flaw in such crucial evidence. Yet in another case, in Maharashtra, the DNA expert again from the FSL furnished a report wherein he stated in his chief examination that “I draw the conclusion that the blood stains on the shirt of MLC Case no YYYY of X Police Station are of the biological offspring of Mr and Mrs YZA and accordingly I issued the DNA analysis result….”.

The irony of the whole DNA evidence was that this expert did not consider that within his own findings there was a mismatch of the DNA at one locus of the biological offspring with that of his alleged parents and the same went against his conclusion. Neither the defense nor the prosecution found this blunder. Further another DNA expert from a prestigious Central Government DNA Laboratory from Hyderabad appeared on behalf of his superior officer in whose name the summons was issued and stated that he does not have knowledge of the details of the case since he did not issue the DNA report in that case and hence the evidence was closed. Here too neither the prosecution nor the Court rose to the occasion to find out why the Senior expert who issued the report did not appear and subsequently the Senior was left scot free at the cost of the prosecution of the guilty and benefit of the defense. I can cite several examples here but lets come to the core issue of mismanagement of DNA science in Criminal Justice System which is nothing but lack of expertise, obligation and proper training to the experts from Government funded laboratories. The Apex Court held in M.C. Mehta V. Kamal Nath & Ors [1996] in SC 1608 that “We cannot cheat on DNA”.

Further in Shri Banarsi Dass V. Mrs. Teeku Dutta and Anr [2005] IN SC 285 the Apex Court held that “the High Court should have held that the conclusive DNA test would have provided necessary material for an effective adjudication”. Therefore with the Judiciary relying to such a great extent on DNA evidence it is the bounden duty of all DNA experts deposing evidence in India to perform their duty to the best possible manner and depose the truth in a scientific manner instead of just saying that “X is the accused because of the match with that of the Y which is the crime scene sample”. I therefore place few suggestions below which are the outcome of my 16 years of Court experience deposing DNA evidence which may be of help, to this generation of DNA experts to better their performance during their deposition.

DNA experts need to do few things before testifying. Check their records pertaining to the case viz., original stock book containing entries of the material objects received by their office pertaining to the case. They need to carry only originals and not photocopies so that they could be got marked as exhibits, if required. Peruse the original file containing all correspondences, acknowledgements, office copy of the report submitted, details of the DNA examinations carried out. Maintain a photocopy of the official correspondence with them and provide the original to be marked as an exhibit in case they are relying on the same and also if allowed by the Court. Original copy of the work record book containing entries of the DNA methods employed at the bench to arrive at the conclusion, which is going to be defended by the expert. The expert needs to establish his credentials especially his qualifications and experience and training as a DNA expert in the first few paragraphs of the Chief Examination. The position of a scientist in a Forensic Laboratory does not mean that he gets automatically qualified as a DNA expert without having the required qualifications, training and experience in the subject of DNA Fingerprinting or testing. There are forensic experts from Forensic Laboratories who have provided DNA reports with results which have contradicted their own findings. DNA Experts should speak of their findings and avoid commenting on findings of other experts.

It has always been my practice to keep a collection of scientific books and latest scientific papers on DNA testing from reputed Forensic Journals with me during deposition to substantiate my evidence. This practice has can convince the Court of scientific principles and methods used to achieve the results. On few occasions I have passed over a collection of popular articles on DNA Testing to the Judge for his knowledge. Further, if possible, loading a media presentation on DNA testing, in general, in a lap top computer would help to detail the technology and a multi media presentation could make things easier. There is a need to contact the Public Prosecutor who has got issued the summons and ask what the Public Prosecutor will inquire about in the course of your testimony. Experts are entitled to know the subject matter, which will be covered in your testimony and prepare accordingly.

Competent evidence is what has been observed on the bench and the note book. In case of making an estimate, such as about allele frequency, paternity index or population statistics, it is essential to clarify what has been estimated. Just saying 99.99998% conclusive and close the statement is not proving the case. It is imperative to say or depose and prove on the floor of the Court as to how that figure of 99.99998% has been arrived. The biggest fallacy many experts today are making is by stating in their deposition that “The statistics in the report establish that Mr X is the biological father to an extremely high degree of certainty”. Establish that degree of certainty with explanation of the statistical value being arrived at is most important and crucial evidence. Marking a copy of the calculations made by to arrive at the statistical conclusions as part of the deposition is very fundamental. The expert needs to inform the Court the details of the observed heterozygosity (Ho), expected heterozygosity (He), power of discrimination (PD), probability of exclusion (PE) and polymorphism information content (PIC) for the loci since that forms the basis of the conclusion of DNA testing.

In conclusion, I can say that our legal system is one of the finest legal system in the world, and depends largely on the testimony of human beings just like yourself. The ideals of our system of justice can be maintained by the continued courage and sacrifice of people who are willing to become witnesses so the system can obtain equal justice for all. Always remember that that we are assisting the Court to arrive at a just conclusion and we are a part of it and not the root of it. Never forget we are under oath.