On Monday,Ranjan Gogoi, former CJI,wasnominated to  Rajya Sabha, as a nominated member, by President Ram Nath Kovind. He has been nominated to fill the vacancy caused due to the retirement of one of the nominated member, Senior Advocate K.T.S. Tulsi.The notification to this effect was published in the Official Gazette and read as follows:

"In exercise of the powers conferred by sub-clause (a) of clause (1) of article 80 of the Constitution of India, read with clause (3) of that article, the President is pleased to nominate Shri Ranjan Gogoi to the Council of States to fill the vacancy caused due to the retirement of one of the nominated member." 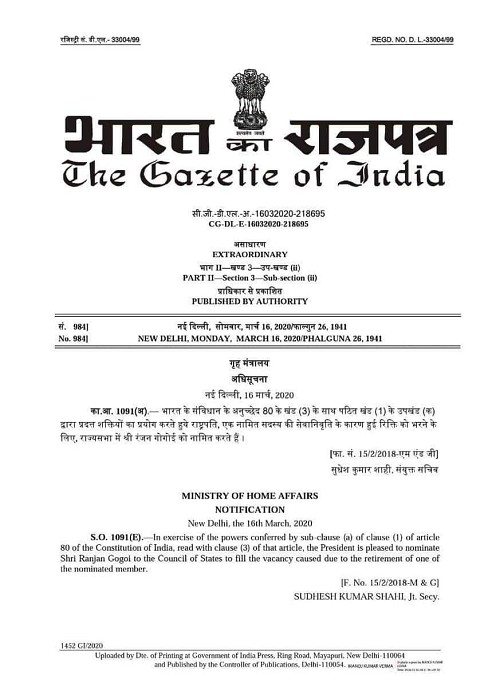 Who is Justice Gogoi?

Justice Gogoi enrolled at the bar in 1978, and practiced at the Gauhati High Court, where he was made a Permanent Judge on 28 February 2001. He was transferred to the Punjab and Haryana High Court on 9 September 2010, becoming its Chief Justice on 12 February 2011. On 23 April 2012, he was elevated as a Judge of the Supreme Court. He was appointed as the Chief Justice of India on 3rd October 2018, succeeding Dipak Misra and retired on 17th November 2019. He is known for manycrucial judgments in cases like Ayodhya, Sabarimala, etc.The Ayodhya Case which ruled that the construction of the Ram Temple over historically disputed land in Ayodhya was lawful.

This makes him the third SC Justice to serve in the Rajya Sabha...

He is the third Supreme Court justice to serve in the Rajya Sabha, and the first to be nominated to his seat, after Ranganath Mishra and Baharul Islam, who were elected as members of the Indian National Congress.