In the wake of the rampant spread of the COVID-19, a three-judge bench of the Supreme Court, headed by Chief Justice SA Bobde,  has asked all State and UT Governments to set up  high-level committees to  consider the release of all prisoners for four to six weeks, so as to prevent overcrowding of prisons, and practice social distancing. These committees will be responsible for deciding and selecting the prisoners to be given bail/parole on several factors such as the nature and severity of their crime, the number of years of the sentence along with any other factors that they might think are relevant. This committee shall include the Principal Secretary of the Home Department, the Chairman of the State Legal Services Authority, and the Director General of Prisons.

Chief Justice Bobde suggested that all prisoners convicted of/charged with offences with a term of seven years or less should be given parole so as to reduce the risk of transmission of the Coronavirus, which is known to be an extremely contagious virus, and the human to human transmission rate of the same is seen to be very high. Under such circumstances, it only makes sense for the prisoners to be removed from the overloaded prisons and decongest the prisons.

The Apex Court expressed its concern regarding the overpopulated prisons in India, and quoting data from one of the reports of the National Crime Records Bureau stated that the occupancy rate of the Indian prisons currently lies at 117.6%, and in states like Uttar Pradesh and Sikkim, the occupancy rate is as high as 176.5% and 157.3% respectively.

The worsening health crisis in the country has compelled the Supreme Court to take such a decision, which will impact a huge number of prisoners. Currently, approximately 4,66,084 inmates reside in the 1,339 prisons in the country. The court has been on its toes, making sure that no delays are made in transferring any sick or symptomatic prisoners to medical facilities. Recently, the Court also took cognizance when 11,000 prisoners were moved to the less congested prisons of Jharkhand.

This, however, brings up the obvious question. Isn't moving the prisoners in this period of complete lockdown itself violative of the practice of social distancing?

The court has also taken into consideration the possibility of outside transmission, and hence has put a pause on the physical presence of the undertrials before the Court and has resorted to videoconferencing for all purposes. There is complete ban on any kind of movement of the prisoners except for movement done for the purpose of decongestion. The Court has also mandated that any sick patients shall be offered medical assistance immediately. They will also be tested for the Virus before being allowed to enter the jail.

It is a well thought out move on the part of the Supreme Court, since the Hon’ble court has not only taken into consideration the right to life and quality of life of the prisoners, which is enshrined under Article 21 of the Indian Constitution, but has also made sure to enlist all necessary precautions that need to be made so as to stop the spreading of this virus due to any carelessness in the execution of the same. The court has asked the State committees to also set up a monitoring team at the State level to ensure that all directives issued by the court are strictly followed.

Now, many might wonder, what about the crime rates? Isn’t it unsafe to let out a convicted criminal out on the streets?

While studying the data on the website of NCRB, it was found that in the year 2013, 34.71% of offenders were prone to recidivism, and were habitual offenders. While this may not be a pleasing statistic, it is to be remembered that the Hon’ble Apex Court is taking every step to make sure that these prisoners do not falter, and remain safe in the lockdown that has been imposed amidst the COVID-19 pandemic. 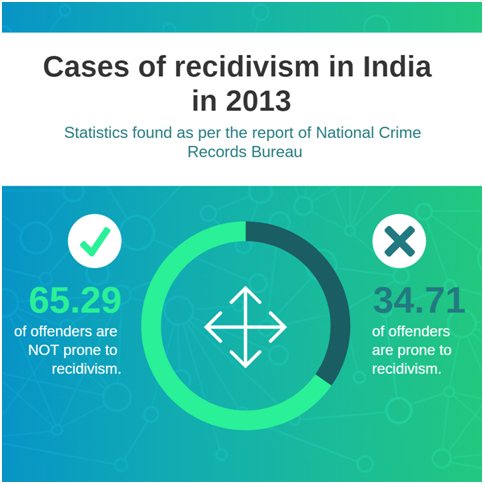