I gave loan of five-lakh rupees to an ex-friend. Since we were friends then, I gave him the loan without any legal agreement. Now that we are not in friendship anymore, the person is not willing to clear the loan nor paying the interest for more than 2 years. My phone calls are also not being answered. He even changed the his house to unkown place.

Anticipating that he will default the loan, I had sent him several emails enquiring about the loan to his OFFICE email address. He responded to few emails saying the he needs more time. He has been giving the lame reasons for past one year and waiting for any longer seems to be waste of time to me. I am thinking to move to court to settle this issue.

My question is - are email evidences sufficient to the court ? I had clearly mentioned in one of the emails the total amount needs to be paid, to which he replied. Can this be considered as the acknowledgement that he has taken loan ?

Requesting for your advice on this. Thank you.

I'm not a legal professional, but will try to answer your question. It's really sad that this 'friend' has cheated you. The fastest way to lose a friend is to lend them money.

Email evidence is considered as evidence in many countries - many famous cases have been settled on email evidence (Bill Gates lost in the Microsoft Anti-Trust case on email evidence). Since you have his work Id, it will be easier for you to show that the Id belongs to your friend and the person answering it was your friend. The server details (physical location of the email server, etc) and the user's IP (showing which internet service this user was using and what was the user's approximate location) can also be traced from the server records.

How did you lend the money? Hopefully by cheque and in your friend;s name? If you paid by cash, it's harder to track the crook down. Cheque payment is undeniable evidence that the money was lent.

Now that being said, the bad news. Our courts, as you might know, require some physical address to serve notice and summons. It might not be so hard to trace your friend if you do some detective work, or hire a Private Investigator. Ask his relatives, friends, former colleagues, landlord, old neighbors, his bankers (banks usually have permanent address and they might do you a favour), visit the school where his kids (if any) used to study, track down anybody he used to know and ask. A detective might also help  you gather more evidence.

Frankly, even when you DO have the address our courts are a pain in the behind. The overall intelligence of people in the 'system' bailiffs, policemen, clerks, judges...oh, the less I say about that the better, not to mention their lack of integrity. For every small thing such as service of summons, you have to bribe. And the COURT FEES - Frankly, for your court fee money you can hire a good private eye (detective) who will track down the fellow. They will charge less than a lawyer any day. Don't waste your life filing a lawsuit but do threaten the person with a lawsuit.

Track that fellow down, confront him with the evidence and threaten him of dire consequences. Hopefully this person will pay you back.

Your this ex rriend must be in some job , govt or pvt , make summons to his employer's name on behalf of your friend , his employer is in love with his office not in with his any employee , it will serve your purpose .

Your e mails can be used as evidences but depends on its presenation .

1) Your case is time barred.

2) The court will ask how and when you paid money. Any earlier transection to trust him with such huge amount.

3) Why no documents taken- just read this observation of SUPREME COURT in similar case.


The High Court was entitled to take notice of
the conduct of the parties. It has been found by the High Court as of fact that the complainant did not approach the court with clean hands. His conduct was not that of a prudent man. Why no instrument was executed although a huge sum of money was allegedly paid to the respondent was a relevant question which could be posed in the matter. It was open to the High Court to draw its own conclusion therein. Not only no document had been executed, even no interest had been charged.

Since the date of advancing loan has not been mentioned by you in the query, I refrain from voicing my opinion on whether or not your case will be barred by limitation. The limitation for filing a money recovery suit is 3 years.

Coming to the merits of the case, it will be difficult for you to make him liable under the law as you committed the blunder of advancing an unsecured loan. It is incumbent upon you to prove his liability with the aid of documentary evidence. An e-mail being an electronic evidence is admissible in the court, but in the absence of any documentary proof which bears testimony to his liability for the repayment of loan, the court will not hold him liable merely on the basis of something stated in an e-mail. 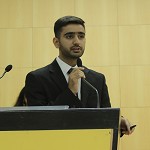 LAWyersClubIndia is coming with many more such Quick Query Resolution sessions for the querists looking for legal advice!

Hope you find this useful!

First it must be filed within three years of his last admission. Secondly there must some suit documents to register a civil case seeeking recovery of money. If you advocate able to convince the court then you have chances of getting a decree. E-mail correspondence is legal and acceptable evidence.