Importance of 'Due Diligence' and a Legal Team for Entrepreneurs. It's Types and Importance!

Entrepreneur’s Knowledge bank - what every entrepreneur needs to know

Due diligence is – sarcastically – one of those kinds of terms which are often felt “known” on the surface, but they mostly remain “unknown” when it comes to putting them into practice. This article takes it up and discusses all that an entrepreneur must know about it in the real world.

While going beyond the dictionary definition, due diligence may be described as the investigation conducted before purchasing another property or company to confirm all facts. Perhaps, in the business world, it is a “strict legal investigation” to verify that particular business or venture, investment or acquisition will be beneficial. Financial decisions come with risks. Due Diligence helps in reconnoitering those specific risks and not making costly mistakes. It may be a lengthy process, depending upon the case, sometimes seeking weeks or even months to complete. 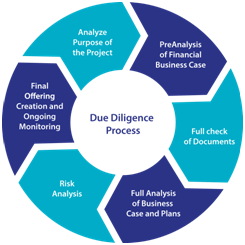 There are certain areas of focus during ‘Due Diligence’ in the business ecosphere such as:

Landscapes of Due Diligence

Due Diligence primarily, if not only, triggers for or during mergers and acquisitions deals and remains specific to that world itself. The acquiring institution assigns risk analysts to perform the Due Diligence on the target firm, which is conducted in either of the two ways or both, Hard Due Diligence and Soft Due Diligence.

Studying assets, benefits, costs, liabilities and structures of the target company is called Hard Due Diligence. It happens to be primarily driven by mathematics and legalities of the matters and highly susceptible to areas or aspects of fewer details.

Merger and acquisition deals are also very much sensitive about the target company’s culture, management and personnel or human elements. Analyzing these elements is known as Soft Due Diligence. It primarily works as a counterbalancing mechanism in case of numbers being manipulated or overemphasized.

Types of Due Diligence

There are various types of Due Diligence relevant for multiple purposes and industries; perhaps their objective remains the same – to provide with knowledge and confidence of information and to empower decision about a prospective deal. Probably the following three types cover almost all sorts of Due Diligence operations.

This type of Due Diligence principally involves observing the involved companies in the transaction, business prospects and the quality of investment. It helps the buyer in understanding potential risks and also planning for the integration with clarity.

What Investors Look For

Investors’ particular priority to know is the key areas of the target company such as current and projected financial details, growth prospects, actual market size, management information, potential to compete in the market and team structure with its level of competence.

It must be supplemented by all communications with stockholders, agreements with customers and suppliers, credit and loan/debt agreements or obligations along with, partnership and joint venture agreements, liabilities and lawsuits if any are there.

It is of utmost importance that all these necessary documents must be kept greatly organized and ready for scrutiny if required during Due Diligence. An existing claim in conflict or unresolved or overlooked problems become a hurdle to progress of the deal. The target company’s status on adhering to compliances proves to be a critical aspect of the deal. Cropping up of incomplete information or contracts, undisclosed debts, facts inconsistent with the claims or discussions act as an absolute speed breaker to any progress unless resolved.

Investors favour the companies which are easy to communicate with at a lesser cost of time and efforts. Keeping lines of communication open and being reactive on clarifications sought with factual explanations are most positive advantages in favour of the prospective company.

It is evident that there is ample legal work involved during this process right from the documentation up to the closure. Having an efficient and capable legal team becomes significant to the Due Diligence, securities offerings, even in drafting the compelling pitches before investors.

Be it initial information sharing, rectifying documentations, any problem area or clarifications to investors’ queries, a legal team plays a significant role. Investors might also insist on making changes to documents, adjust the bidding price, fine-tuning of shareholding structure or investor rights and responsibilities might need to be altered.

Furthermore, there are specific provisions introduced under the SEBI Regulations 1996 about the manner of Due Diligence. Various Indian statutes relating to economic matters like Section 24 of the SCRA, 1956, Section 53 of the MRTP, 1969, Section 27 of the SEBI 1992, Section 278(B) of the IT Act, 1961 comprehend offences making companies guilty.

All these are the examples where both, the legal team and its competence, play an extraordinarily critical role to achieve a signing stage and wrapping up the aftermath of cleaning up process.

Entrepreneurs should often interact with their legal team/person on regular intervals, possibly right from the beginning. It helps in keeping the records clean and in shape to be presented at the first occurrence of the opportunity.

Published in Others
Views : 333